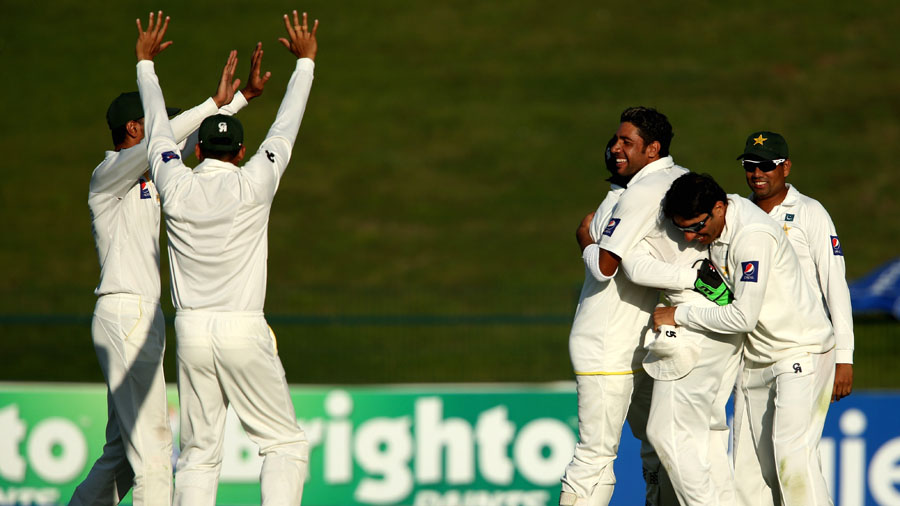 Misbah-ul-Haq was poised to overtake Imran Khan and Javed Miandad as Pakistan’s most successful Test captain, after his team played the perfect game to finish the fourth day on the verge of victory in Abu Dhabi.

Mohammad Hafeez’s brisk century – his first in more than two years – allowed Misbah to declare in the first half of the day, giving Pakistan’s bowlers at least 144 overs to dismiss New Zealand. They took eight wickets in 54 New Zealand’s task was enormous. The target of 480 was more than they had ever scored in the the final innings of a Test, and to secure a draw they had to play their third-longest fourth innings. The visitors made a bright start, with Brendon McCullum and Tom Latham scoring swiftly against the Pakistan fast bowlers to achieve New Zealand’s first half-century opening stand in 16 innings. The introduction of spin changed everything, though. Zulfiqar Babar and Yasir Shah slowed down the scoring and took three wickets in 21 balls to put the magnitude of New Zealand’s task back in perspective.

Babar had bowled a few economical overs when Latham, looking for release, attempted a sweep but top-edged to Yasir running in from deep backward square leg. Yasir then got rid of New Zealand’s most experienced batsmen, trapping both McCullum and Ross Taylor lbw with googlies. McCullum’s stayed low but Taylor simply plonked his foot in front of the stumps and played the wrong line. New Zealand had gone from 57 for 0 to 69 for 3 by tea. Kane Williamson and Corey Anderson were steady for a while in the final session, against Babar and Yasir, so Misbah turned to Hafeez and Rahat. The results came quickly. From round the wicket, Hafeez slid the ball across the advancing Williamson, leaving Sarfraz Ahmed with a straightforward stumping to end the partnership on 42.

The possibility of Pakistan wrapping up the Test with a day to spare increased when Rahat struck off successive deliveries. His late movement drew the edge from Jimmy Neesham, who made a two-ball duck, and BJ Watling was bowled after the ball deviated significantly because it hit the under side of his thigh pad. Anderson became Imran Khan’s first wicket after he shouldered arms to a straight delivery. The batsman chose not to review despite replays indicated the ball had pitched fractionally outside leg. Tim Southee departed quickly too, but the ninth-wicket pair of Ish Sodhi and Mark Craig stubbornly resisted for 89 deliveries to take the game into the final day. That New Zealand had such a long haul ahead of them was down to how quickly Pakistan scored on the fourth morning.

Hafeez had said after play on day three that they wanted 160 more runs, and Pakistan scored exactly that many in 32.2 overs. Hafeez’s timing was impeccable from the start, cutting and driving the seamers when given width, and capitalising on Sodhi’s poor lengths by using his feet to take the ball on the full and drive through cover. When Sodhi got his legbreaks to pitch right, they spun viciously to beat the bat several times, foreboding signs for the New Zealand batsmen.

He dismissed Azhar for the second time in the match, lbw while playing the sweep, and later picked up Younis Khan in similar fashion. The good balls from Sodhi were interspersed by several bad ones, though, and Hafeez pulled a long hop to bring up his half-century. He continued batting aggressively after lunch and launched Sodhi over long-on to move on to 97. His century – his first against New Zealand – came off only 130 deliveries and Misbah called his men in 27 minutes into the second session. It was his fifth consecutive declaration and it put him on the brink of a historic win.