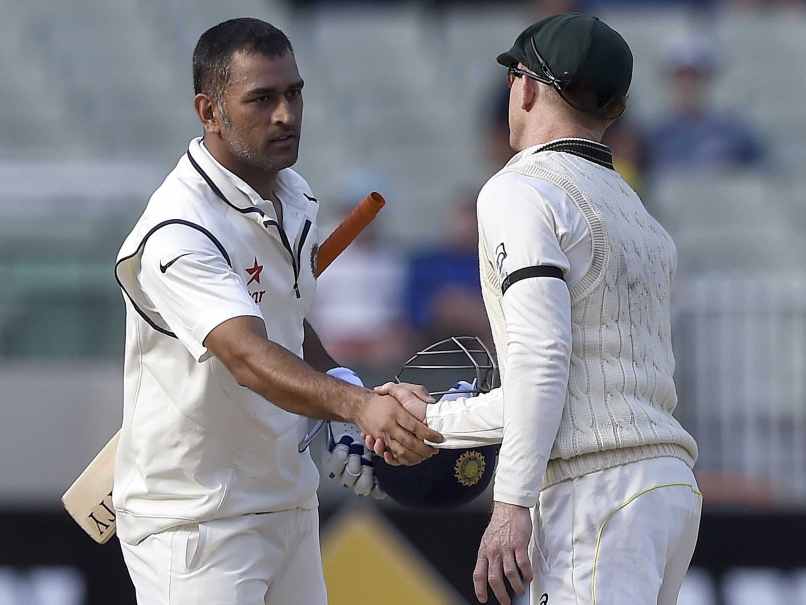 Australia regained the Border-Gavaskar Trophy after India hung on for a tense draw in the third Test in Melbourne on Tuesday.

India were never in the hunt on the final day after Australia took till lunch to declare at 318 for nine, leaving them to chase 384 runs for victory off 70 overs. Their task became even more herculean when they were reduced to 19 for three in the ninth over and from there it was a matter of survival. The match was called off with four overs remaining when India were 174 for six with M.S. Dhoni on 24 and Ravi Ashwin on eight. The Australians have won the four-match series with one Test left to play in Sydney next week after winning in Adelaide and Brisbane. The draw means that India have not won at the Melbourne Cricket Ground for 33 years. India resisted for a time through Virat Kohli and Ajinkya Rahane, who shared in a record 262-run stand in the first innings, but once Kohli was dismissed to break an 85-run partnership, pressure again mounted on the tourists, who have a notorious reputation for lower-order batting collapses.

Kohli was out to a poor shot on the first ball after tea, spooning a catch straight to Joe Burns at square leg off Ryan Harris for 54. Mitchell Johnson then bowled Cheteshwar Pujara (21) with a gem of a delivery, straightening off the pitch to crash into off-stump. Johnson rattled Pujara with a short-pitched snorter into the grille of his helmet and then two balls later produced his wicket-taking delivery to leave the tourists at 141 for five with 18 overs left. Rahane mistimed a pull shot off Josh Hazlewood to Shaun Marsh for 48 off 117 balls to expose the India tail with 14 overs remaining. India had a disastrous start to their innings and lost Shikhar Dhawan (0), Lokesh Rahul (1) and Murali Vijay (11) to slump to 19 for three in the ninth over. Harris struck with the second ball of his opening over, trapping Dhawan leg before wicket for a duck.

Johnson backed that up in the next over getting a thick edge off debutant Rahul, promoted to number three, and Shane Watson running back from slips took the skied catch over his shoulder. In-form opener Vijay went to a controversial leg before wicket call by umpire Kumar Dharmasena in the ninth over of the innings by Hazlewood. Vijay, who has a ton and two half-centuries in this series, was given out although replays showed the ball would have missed leg-stump. India refuse to use the Decision Referral System (DRS) and have been on the wrong end of several umpiring decisions. Marsh was run out for 99 ahead of Australia s conservative lunch declaration at 318 for nine after crawling along in the morning session.

Marsh scampered after a risky single off Umesh Yadav only to be caught out by Kohli s throw from behind the non-striker s end. Towards the end of a meandering session Marsh went after quick runs and hoisted Ashwin for a six and a four off successive balls to reach 96 but became edgy on 99 with a lunch-time declaration imminent.

Marsh became the 16th player in Test cricket to be run out on 99 and the third Australian, with all of them occurring in Melbourne. The last Australian was Arthur Morris in 1953. It was Marsh s highest score against India and he was closing in on his third Test century and first home Test ton after knocks of 148 in South Africa and 141 in Sri Lanka. Harris was the other Australian wicket to fall, caught behind off Mohammed Shami for 21 and giving Dhoni his ninth dismissal of the match. -dunyanews