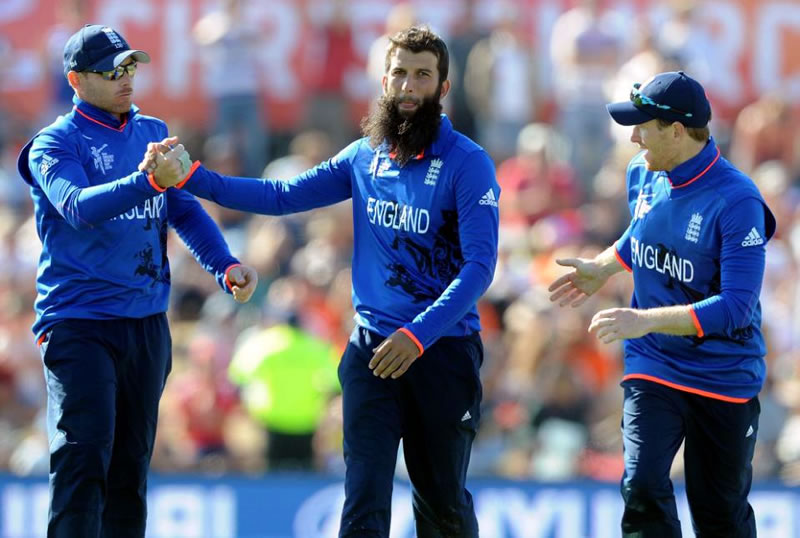 Moeen Ali scored 128 and took two wickets as England hauled its Cricket World Cup campaign back onto the rails after two demoralizing losses with a 119-run win over Scotland.

After losing to Australia by 111 runs and to New Zealand by eight wickets, England entered Monday’s match against second-tier Scotland shaken, apprehensive and desperate for a win to lessen the threat of an early tournament exit. It used as its inspiration for the match the story of the host city Christchurch which has been substantially rebuilt since being devastated by an earthquake four years ago. England adopted the motif of rebuilding, laying a foundation with Ali’s 172-run opening partnership with Ian Bell (54), reaching 303-8, and it added structure in bowling out Scotland for 184. Steve Finn may have made the biggest single form reversal by an England player, taking 3-26 from nine overs after the two overs he bowled against New Zealand cost 49 runs.But England’s performance was far from complete – it should have built far more strongly on an opening stand which was the largest by an England pair in a World Cup match.

Its middle order failed and it lost the wickets of Ali, Gary Ballance (10) and Joe Root (1) in the space of 10 balls to slip to from 201-1 to 203-4. Captain Eion Morgan hinted at the onset of some batting form, scoring 46 from 42 balls to stiffen the latter part of the innings, putting on 49 with James Taylor (17) and 45 with Jos Buttler (24). England still only reached 300 in the final over, in which it lost two wickets, including Morgan’s. “I don’t think there was ever a state of panic,” Morgan said. “Obviously we had two hard games and the fact that we didn’t perform was most disappointing.

“But a win just puts things a little more at ease. It gives guys a little bit of confidence, even the guys who didn’t perform today will benefit from guys who have had a little bit of success today.” Ali and Bell had given England the start it needed to steady its nerves and quieten the challenge of the Scots, who were aiming for their first win over England or any top-eight team. England had had only two clear days to regroup after its mauling by New Zealand, which needed only 12.2 overs to chase 124 for victory, making the loss the heaviest in its history in terms of balls remaining.

After winning the toss, the Scottish squad was hoping if it could strike early Monday, the pressure on England would grow and it might buckle. We’re very disappointed,” Mommsen said. “Having won the toss we were very disappointed with the start we had with the ball. “In the second half of the innings I thought we did brilliantly to restrict them to 300 with the platform they had and the batters they had to come. “We went into the halftime break pretty sure we were in with a shout. Unfortunately, with the bat we just couldn’t get going. We’re a better side than we showed today.”