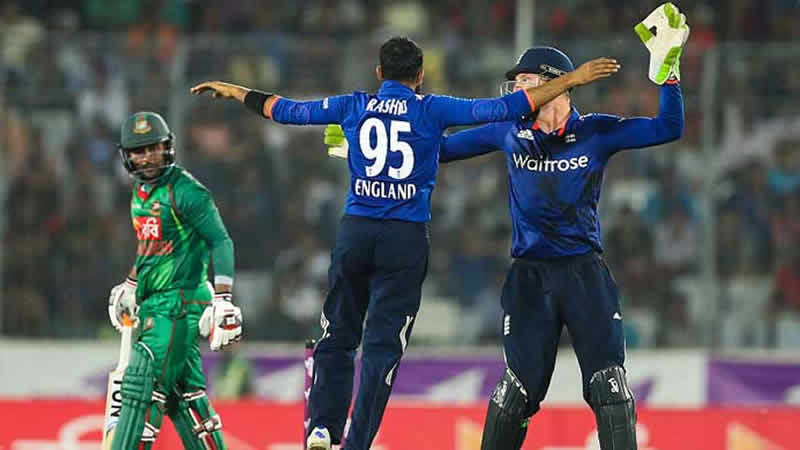 England and Bangladesh will look for a return to form from their top-order batsmen when they launch the Champions Trophy at the Oval on Thursday.

On Monday, across London at Lord s, England collapsed to 20 for six in five overs — the worst start in one-day international history against the South Africa new-ball duo of Kagiso Rabada and Wayne Parnell. It certainly was a wake-up call in the fact that you need to be able to adapt in different circumstances,” England captain Eoin Morgan told reporters at the Oval on Wednesday. Even in June, early morning cloud cover that aids swing is often a key part of English cricket conditions.

At Lord s, a green-tinged pitch did not find favour with Morgan but even on more placid surfaces the issue of how best to bat under grey skies, which can often set in all day in England, remains. England were already an unbeatable 2-0 up in the three-match series against South Africa and although Morgan was glad the reverse had come before the Champions Trophy rather than during the tournament, it remains a worry. Bangladesh highlighted the issue of under-performing openers in dramatic style by collapsing to 84 all out in reply to Champions Trophy title-holders India s 324 for seven in their final warm-up match at the Oval on Tuesday. Defeat by 240 runs was certainly not what they wanted.

You know, 84 obviously doesn t look good,” said Bangladesh captain Mashrafe Mortaza. You have to think what the mistake was, so I think we can handle tomorrow especially.The Champions Trophy opener is set to feature several survivors on both sides from Bangladesh s 2015 World Cup win over England, when a hundred from Mahmudullah and aggressive seam bowling propelled the Tigers to a memorable success at the Adelaide Oval. That defeat knocked England out of the World Cup and led them to adopt a far more aggressive approach to the one-day game that, blips like Monday apart, has served them well in the intervening two years.

Since then, we ve been on a huge upward curve, and we ve been tremendously lucky in the fact we have had a group of players that have bought into a way of playing and enjoyed it, and executed extremely well,” said Morgan. At no stage have we second-guessed ourselves or the direction that we re going in, and that s very powerful as a group I think.” But Mortaza said Bangladesh had it in them to spring a surprise. The thing is that we all know that on a given day we can beat anybody. But we have to start well.” He added: “England are a very good side. Joe Root, Jason Roy, obviously captain Eoin Morgan is in good form, Ben Stokes, Jos Buttler. But again, it s cricket and anything can happen in the game.

So you never know.” Bangladesh come into the Champions Trophy bolstered by warm-up wins over New Zealand and Ireland in Dublin this month. Whatever you have done in the past gives you a little bit of confidence, but then you have to start again,” said Bangladesh coach Chandika Hathurusinghe, the former Sri Lanka batsman. “So whatever we do first against England, we need to start well and that s what we are focusing on.”