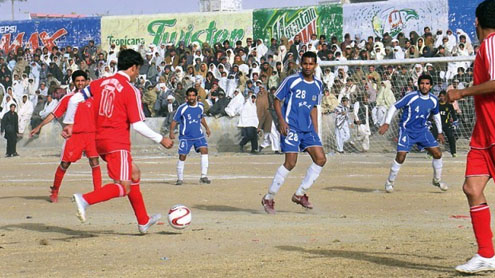 The arrangements have been given final touches to stage the 4-team international fixture under the banner of AFC. Afghanistan, Pakistan, Tajikistan and Pakistan A will show their game skill during the 5-day juniors’ soccer gala.The opening ceremony will be taken place today at same venue, as the chairman, Capital Development Authority (CDA) Farkhand Iqbal will the chief guest on this eve. Also top officials of Pakistan Football Federation (PFF) and Islamabad Football Association (IFA) will be present in the ceremony.

Meanwhile, chairman Organizing Committee Dr. Fazal-ur-Rehman said that the participating teams arrived in Islamabad to take part in the event. “Initially, seven teams including one from Pakistan had to compete in the AFC Football Fixture. However, four teams regretted to visit Pakistan including Iran, Turkmenistan, Kyrgazistan and Kazakhstan, “he maintained.
“Now, four teams will be in action during the five days international event. Two teams from Pakistan and each one from Tajikistan and Afghanistan are in the tournament to show their mettle.

How ever, we have assured fully security to all team during the tournament and will also provide international standard facilities to players and officials as well, “he said.Fazal further said that the other arrangements for holding the international fixture in the benefiting manners had been finalized and the different committees also constituted, which were performing their duties actively. “AFC has already awarded next AFC Football Festival to Pakistan that will be held at same venue next year, “he added.

He said that the closing ceremony would be held on April 15, 2012 and all visiting teams would fly back their respective hometown on April 16. “We will provide all the facilities to foreign team during the AFC Under-14 Football Festival according to international demands. We are working under the guideline of Pakistan Football Federation (PFF), “he concluded. – PT