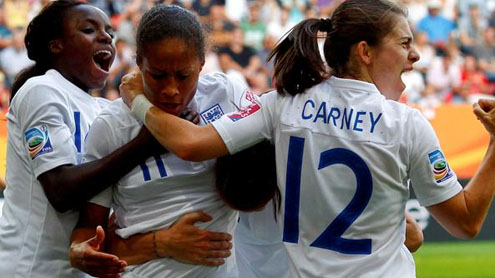 Great Britain’s women’s football team will play New Zealand in the opening event of the Olympic Games at the Millennium Stadium on 25 July.

They will then face further group games against Cameroon and Brazil.The Team GB men’s side will take on Senegal in their first fixture, at Old Trafford on 26 July.Stuart Pearce’s side also face United Arab Emirates on 29 July and Uruguay on 1 August in the group stage of the men’s Olympic football competition.”Uruguay will be tough but I wouldn’t dismiss anyone,” said Pearce after the draw. “The addition of three over-age players can contribute to a really strong side. It will be tough, tournament football always is. Everyone in the squad will have star quality but I’ll pick the squad on merit.

“The squad may not reflect every home nation and celebrity, but they will be the best 18 players who have the best opportunity to deliver a gold. That’s my only criteria.”Pearce also hinted after the draw that he would name his squad in mid-May to ensure the squad would keep in shape in the run-up to the tournament.”Sometime in mid-May the Olympics squad will go out, which will be fair to the players,” added Pearce.”They’ll have plenty of warning in regard to a summer break and obviously a fitness programme and with a duty of care to their clubs as well for their planning of pre-season.”

Each team in the men’s competition comprises 18 players, with 15 of them born after 1 January 1989, with Pearce set to meet David Beckham to discuss his possible participation .The over-age option also means that Liverpool’s Luis Suarez could play for Uruguay in the tournament, while Newcastle duo Papiss Cisse and Demba Ba would be eligible to feature for Senegal, who were the last team to qualify for the competition, sealing their place with a play-off victory over Oman at the City of Coventry Stadium on Monday .There are no restrictions for the women’s competition and boss Hope Powell said she was looking forward to three exciting group fixtures.

“Brazil will be a great game at Wembley, they are always there or thereabouts in major tournaments,” said Powell, who is also the coach of the England team. “Now it is down to our preparations. We have every chance of progressing but we can’t take it lightly. We played New Zealand in the World Cup last year and it was a very tough encounter. Cameroon are an unknown quantity.”This gives us a great opportunity to showcase our sport, we open the Olympics and hopefully we can encourage more females to get into the sport.”

The opening ceremony for the Games takes place on 27 July, but the two GB teams will have played their first matches by then.Both GB teams already knew the dates and venues of their opening three fixtures but found out the identity of their opponents at the draw for the group stage, which took place at Wembley Stadium, London, on Tuesday.The draw was hosted by Match of the Day presenter and former England international Gary Lineker, who believes the tournament could become a massive success.

“I feel the football in the Olympics could become huge,” said Lineker. “If Team GB start going well there will be a real fascination and an interest in it.”There are more than 1.5 million unsold tickets for the football tournament, although the exact dates of when they will be available to buy is not yet known.”We’ve already sold over a million tickets and we are confident of selling the rest,” said organising committee chairman Lord Coe.

During the competition, matches will be played at Hampden Park (Glasgow), Sports Direct Arena – to revert to St James’ Park during the Games (Newcastle), Old Trafford (Manchester), the City of Coventry Stadium (otherwise known as the Ricoh Arena), the Millennium Stadium (Cardiff) and Wembley (London).The 16 teams in the men’s competition have been split into four groups, with the top two in each group advancing to the quarter-finals.

After Pearce’s men start with their Old Trafford fixture, they will then play at Wembley on Sunday 29 July before their final group match at the Millennium Stadium on Wednesday 1 August. More than 50,000 tickets have been sold for the opening game at Old Trafford and a double-headed friendly is expected to take place ahead of the tournament at Middlesbrough’s Riverside Stadium.

The Football Association has yet to confirm the line-up but GB’s men are thought likely to take on Brazil in the warm-up. It could take place on 20 July and may also feature the women’s team facing Sweden.The 12 teams in the women’s competition have been split into three groups, with the group winners and runners-up joined by the two best third-ranked teams in the quarter-finals.After their Millennium Stadium opener against the Football Ferns, Powell’s side will play again in Cardiff on Saturday 28 July, with their final group match on Tuesday 31 July at Wembley.Current Olympic champions USA and current World Cup holders Japan were seeded alongside Team GB and have been drawn in separate groups. – BBC

Novak Djokovic pulls out of Serbia Open after grandfather’s death

Novak Djokovic pulls out of Serbia Open after grandfather's death