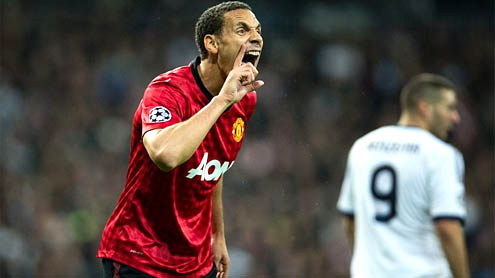 Manchester United and England defender Rio Ferdinand has shared the pitch with some of the greatest players to grace the English game but who are the 11 stars he rates as the best he’s played with?

Speaking as part of the One2Eleven feature on the Sky Sports programme, The Fantasy Football Club, he picked his players, position by position.Sir Alex Ferguson has hailed the current United team as better than his 1999 Treble winning side but even they might struggle against this lot?In the words of Ferdinand: ‘I don’t care who you bring – you are not beating this team.’ I’ve played with a good few keepers over the years. David Seaman was a fantastic keeper, Nigel Martyn was a really good keeper, but the standout for me would have to be Edwin van der Sar.He’s just cool under pressure – he never panicked, and I think that’s a big thing for when you are playing. He didn’t really say too much in the changing room – he got his points across by talking; he wasn’t a shouter and a bawler. Danny Mills at Leeds was a great right back – if he listened! He used to love getting off the leash and flying up and down the wing. He thought he was a winger sometimes.But I think I’m going to have to go with Gary Neville – ‘Motor Mouth’. Young players nowadays should look back at the way that he played the game, not just in terms of his defending but the way he overlapped and attacked.When a full back makes those 60-yard runs up and down the wing with a chance that he might not get the ball off people like David Beckham and Cristiano Ronaldo but he’s doing it for the team’s cause.

A lot of kids nowadays don’t appreciate that. Gary moaned about everything. His kit? The cotton’s not right. His socks? They’re a bit tight. He’d find anything to moan about but you get one of those in a changing room and he was that person. It’s a toss of a coin between Patrice Evra and Ashley Cole. Pat’s a great player – he’s great going forward, loves to attack and he’s got a great appetite for the game.Ashley Cole is the same. He’s a great defender one-on-one. I remember in the World Cup we played against Ariel Ortega of Argentina and he was sharp but he couldn’t get a yard on Ash. He was at his toes – a little Rottweiler, he was.So I think I’d put Ash just ahead. Pat won’t be happy with that but otherwise my team’s going to be full of Man Utd players! Obviously I’m omitted from it, otherwise I’d walk into it straight away! Slaven Bilic was a great player – I learned a lot from him when he came to West Ham.I was young then and always wanted to be a sponge and learn what players were like. Probably my best partnership in an England shirt was with Sol Campbell. With certain players you don’t have to train on stuff – that’s what it was like with Sol. One-on-one in his day you couldn’t get past him. At Leeds, Dominic Matteo was brilliant – an under-rated player. He loved a night out, he did – and he still does, I heard! So for that he’s not going to make the squad.John Terry is another great player – he attacks the ball, can head it and can pass and play as well. He’s been successful at Chelsea too.But I’m going to have to go with Vidic. He’s probably the best partner I’ve played with as we just seem to know where each other is going to be. David Beckham is up there with the best passers I’ve ever played with; over a long distance he was ‘radar foot’. Some left footers look beautiful when they pass the ball. His right foot was like that – it even sounded nice when he hit the ball.

I think Lee Bowyer was joint top-scorer in the 2000-01 Champions League playing from right midfield but he was the worst trainer ever. He used to go out and try to nutmeg people in training – that’s all he cared about.But it has to be Ronaldo. People talk about great players but he made himself a great player. He was obviously born with a lot of talent but he’s one of the best professionals I’ve been around.

He trained hard, he was always one of the first in and last out, honing his skills, working on his step-overs, working on his shooting with both feet. If you were going to build a proto-type of a player, you wouldn’t be far off building him. Just a bit better looking! To be honest, there’s only one man, Ryan Giggs. He’s a phenomenal player to work with, day in, day out. He was an out-and-out left winger with pace, skill, drive who has evolved into someone who can dictate a game. He’s evolved into a completely different player – to do that, he must be some footballer! This is possibly the hardest place to select. I’m leaving Steven Gerrard and Frank Lampard out of my all-time team. But Paul Scholes is my favourite footballer I’ve ever played with.Watching him turn, open up and then just smash one over to the winger is just beautiful. I commentate while I’m playing and if a bit of skill gets done on the pitch I’m all over the place! I can’t leave him out. I remember my first training session: I got the ball from the keeper, I passed it to Gary Neville at right back and Keane just exploded, saying: ‘You passed it sideways, that’s the easy pass! You’re not at Leeds or West Ham now!’At the time I thought: ‘What’s he talking about?’ Then when I got home, I sat and thought about it and thought: ‘Yeah, you’ve got to try and affect the game’. For that he has to get in my team. Ole Gunnar Solskjær – a great player and one of the only people I’ve seen always do well against Ashley Cole. He wasn’t quicker than Ash at all, but he had the knowledge of where to be on the pitch and where to run and when to run.But the first one I’ve got to put in there is Wayne Rooney. He’d have gone mad if he wasn’t in my team! He can do everything – that’s the thing about him. He can play in the hole as a No 10 or he can be the No 9. He’s cute up top as well – he’s got a great understanding of the game. Robbie Fowler was a great player, as was Michael Owen. The two of them were brilliant goalscorers and great players.People talk about young players now, saying: ‘He’s going to be the saviour of football, English or European’ but those two were scoring hat-tricks every other week when they were 18 or 19 years old. But I’m going to have to go with Ruud van Nistelrooy.He was the ‘mad’ finisher. He’d get the ball and just smash it home, side-foot or volley. If you won 1-0 and he didn’t score, he wasn’t happy. His goalscoring record at Man Utd was phenomenal. – DailyMail