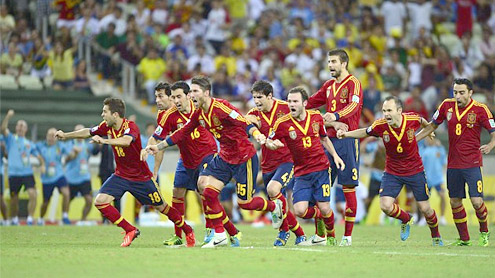 Spain edged into the Confederations Cup final with a dramatic 7-6 win on penalties against Italy in Fortaleza.

The Italians – humbled by Spain in last year’s European Championship final – were out for both revenge and a Maracana showdown with hosts Brazil, but they failed to turn their dominance over 90 minutes into goals.A weary Spain side waited until extra time to turn the screw but they still needed Leonardo Bonucci to miss one of 14 spot-kicks between the nations before sealing their place in Sunday’s final through Jesus Navas.Less than a year ago, Italy were brushed aside 4-0 in Kiev, but if the Azzurri arrived in Fortaleza believing revenge was impossible, it was not immediately apparent.

Barcelona winger Pedro dragged an early shot through a three-man backline and just wide, and Spain would not enjoy many better chances inside 90 minutes.Emanuele Giaccherini and Alberto Gilardino went close before an improbable high ball forward found Christian Maggio all alone in front of Iker Casillas, who just about put a glove to the ball.Italy were carving Spain apart at will but in the 36th minute Maggio wasted the best opportunity of the first half.

Unchecked at the far post, he dipped his head instead of putting a boot through Giaccherini’s lofted cross, to Casillas’ visible relief.Fernando Torres’ superb solo effort soon warned Italy to remain vigilant, however. The Chelsea striker controlled Xavi’s deft flick-on before rifling the ball inches past the far post.Navas replaced his new Manchester City team-mate David Silva shortly after the restart and the winger soon tested Gianluigi Buffon’s reflexes with a low drive to the far post.

Andres Iniesta then worked his way from the dugout to the D and, although his shot sailed wide, Spain were beginning to show more bite and resilience.Only a desperate block from Gerard Pique denied Claudio Marchisio from six yards, though, and five minutes from full-time the Barca defender would miss the mark from the same distance.A rare foray forward from a tired Spain saw Torres drive down the right wing but the striker would have preferred to be in Pique’s place when his low cross arrived at the near post.

Sergio Ramos failed to put his forehead on Xavi’s free-kick into the box deep into stoppage time and Brazil were left waiting a little longer to discover their final opponents.The thickness of a post spared Casillas from Giaccherini as extra time began but it would be Spain’s players who found hidden reserves of energy.Pique and Ramos both saw tentative attempts go wide before Jordi Alba skimmed the crossbar with a well-controlled strike from Iniesta’s deft cross.Fifteen further minutes were ordered and substitute Juan Mata continued Spain’s spirited revival with a snapshot from the edge of the area.

Cramp became a major issue for Italy’s defenders and with Giorgio Chiellini among those lying prostrate on the pitch, both Navas and Xavi forced desperate saves from an under-siege Buffon.The Juventus stopper did survive long enough to book a penalty shoot-out, however, and a near-perfect contest began with Antonio Candreva’s audacious chipped finish.But neither Buffon nor his Spanish counterpart Casillas would get a hand to the ball and it fell to Navas to slot home the decider after a shattered Bonucci blazed his kick over to end Italy’s adventure. – DailyMail