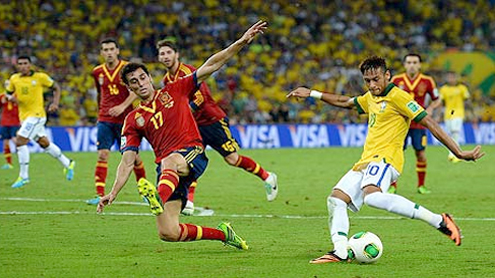 Two goals from Fred, one either side of a stunning left-footed shot from Neymar, gave next year’s World Cup hosts their fifth straight win in the competition as they clinched the trophy for the third time in a row.Spain endured a miserable night with Sergio Ramos missing a penalty early in the second half and Gerard Pique sent-off after 68 minutes for a lunge on his new Barcelona team mate Neymar.

Fred put Brazil ahead after two minutes, Neymar added a majestic second just before half-time and the crowd erupted again when Fred made it 3-0 two minutes after the restart with his fifth goal of the competition.The Maracana crowd taunted Spain and chanted “the giant is back” as Brazil overpowered Vicente del Bosque’s team, whose last competitive defeat was against Switzerland at the 2010 World Cup.

Brazil started this competition just over two weeks ago with a third minute goal against Japan and began this final in similar fashion with an even faster opener. Fred’s second minute hook-in while he was on the ground lacked the powerful beauty of Neymar’s strike against Japan, but its impact was even more emphatic.The crowd, who just minutes earlier had given a rousing rendition of the Brazil national anthem, raised the decibel levels even higher in celebration to settle Brazil’s nerves, unsettle Spain’s, and put the hosts firmly in control.

Oscar should have quickly doubled the lead but fired wide after eight minutes when Fred set him up with a clever backheel, while Paulinho went close in the 14th minute when he had Spain keeper Iker Casillas back-pedalling to keep his lobbed shot out.Spain were clearly rattled by Brazil’s rampaging start and they survived another early scare when defender Alvaro Arbeloa escaped with a yellow card when he was the last defender and sent Neymar tumbling. Spain, who usually dominate matches with their intricate midfield passing moves, showed patches of their usual self-assured control, but they also looked tired and leggy following Thursday’s exhausting semi-final penalty shoot-out victory over Italy.

In contrast, Brazil, with Fred, Neymar and Paulinho looking fresh and powerful, continually had Spain on the backfoot with a series of swift breaks, often initiated by David Luiz after some Spanish-style passing of their own.David Luiz’s name boomed through the cavernous ground four minutes before half-time when he raced back to clear a goalbound shot from Pedro just in front of the line, with Julio Cesar beaten.

Instead of finding themselves pegged back to 1-1, Brazil were 2-0 ahead within three minutes. Oscar provided the final pass to Neymar who smashed an unstoppable angled left-foot shot, past Casillas at his near-post and into the roof of the net.Spain were bidding to become the first team since Uruguay in the 1950 World Cup’s decisive match to beat Brazil in a competitive international at the Maracana, but after falling behind so early, that never looked likely. Instead, Brazil fans left believing that coach Luiz Felipe Scolari, who won the World Cup with Brazil on 30 June 2002, could deliver a sixth world title to the Maracana in a year’s time. – Guardian