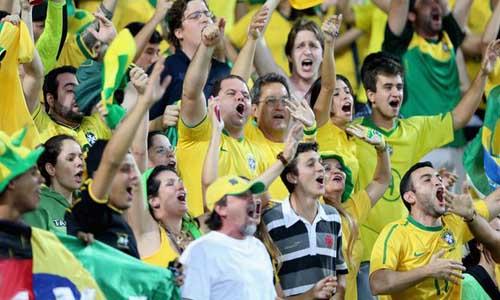 The month-long tournament sees 32 nations compete for a place in the final in Rio on Sunday, 13 July. The opening match will be preceded by a ceremony in Sao Paulo that pays tribute to nature, people and football. “Let me tell you the time has arrived. We are going together. This is our World Cup,” said Brazil coach Luis Felipe Scolari on Wednesday.

Last year more than a million people took to the streets of major Brazilian cities to protest against what they see as excessive spending on the World Cup. The host country’s government is keen to prevent a repeat of some of the violence seen at those protests, and Brazilian president Dilma Rousseff has said she will not allow violent demonstrations to mar the World Cup. Thousands of extra police and soldiers will be deployed to ensure the matches get under way smoothly. England open their World Cup campaign against Italy on Saturday, 14 June – a game you can see live on the BBC in the UK. Roy Hodgson’s team will also play Uruguay and Costa Rica in their Group D fixtures.

Hosts Brazil start as favourites to win the World Cup for a sixth time, while holders Spain are aiming to win a fourth major tournament in a row after winning the European Championships two years ago. The other seeded teams are Colombia, Uruguay, Switzerland, Argentina, Germany and Belgium. Match of the Day presenter Gary Lineker believes there are four teams with a realistic chance of winning the tournament. I have a feeling it will come down to four countries, although unfortunately I do not think one of them will be England,” said former England striker Lineker. “I’m going for Germany, Spain, Argentina or Brazil but I feel that the pressure may well be a little too much for the host nation.”

The host nation have never lost their opening World Cup game, with the previous 20 opening games producing 14 victories and six draws for the hosts. Scolari’s Brazil side will be expected to win in Sao Paulo on Thursday, in a match that kicks off at 21:00 BST. A capacity 65,000 crowd is expected for the match, with their journey to the stadium eased after metro workers voted not to resume a strike over pay and the dismissal of 42 colleagues. The host city for the opening ceremony had been braced for considerable disruption after traffic chaos was caused by a five-day stoppage earlier in the week. As one problem eased another began, however, with airport workers in Brazil’s second largest city Rio de Janeiro announcing a 24-hour strike starting at midnight on Wednesday, meaning industrial action will continue through the opening day of the World Cup.

Governing body Fifa said it had sold more than 2.9 million tickets, but they were still available for several matches on Wednesday, including some involving Germany, Italy and France. There will be 31 matches shown live on BBC television and online, starting with Spain v Netherlands on Friday, 13 June, and live text commentary on all 64 matches, available on the BBC Sport website and app for mobile, tablet and connected TV. BBC Radio 5 live will also be providing 24 days of live coverage and 61 live match commentaries from football’s showpiece tournament. The BBC will also broadcast the 2018 and 2022 World Cup finals in Russia and Qatar after signing a new rights deal with Fifa. -bbc