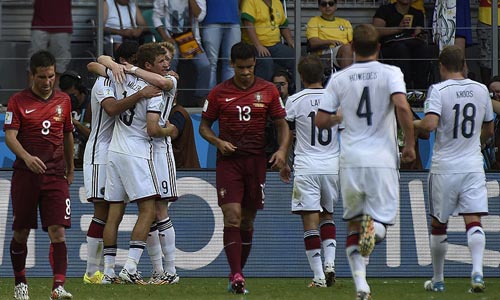 Thomas Mueller scored a hat-trick as Germany thrashed Portugal 4-0 to leave Cristiano Ronaldo’s dreams of dominating the World Cup in tatters on Monday. Bayern Munich star Mueller bagged the first treble of his international career as Germany shrugged off a troubled build-up to the tournament to make a flying start in Group G.

But it was a disastrous afternoon at Salvador’s Fonte Nova Arena for Ronaldo and Portugal, who had defender Pepe sent off for a first half headbutt on Mueller. The match between the African champions Nigeria and the three-time Asian champions Iran ended with an uninspiring goalless draw in their Group F meeting in Curitiba.

Both the sides had to settle for a point apiece. In Group G’s other game on Monday, 2010 quarter-finalists Ghana face the United States in Natal having knocked out the Americans in the last 16 four years ago. -thenews