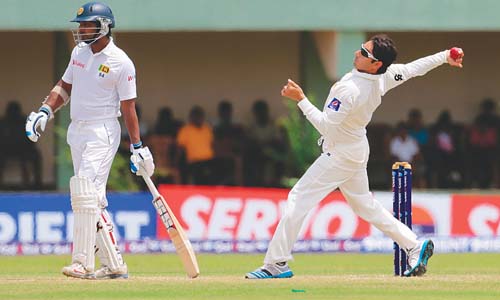 Pakistan off-spinner Saeed Ajmal, the world’s top-ranked bowler in one-day cricket, has been reported for a suspect action, the world governing body said Monday, the second such incident in his career.

Match officials at the just-ended first Test between Sri Lanka and Pakistan in Galle “cited concerns over a number of deliveries that were considered to be suspect and concluded that the bowler’s action needed to be tested”, the International Cricket Council said in a statement. “Ajmal’s bowling action will now be scrutinised further under the ICC process relating to suspected illegal bowling actions reported in Tests, ODIs and T20s.” As per ICC regulations, Ajmal will have to undergo tests of his action within 21 days, but is allowed to play on until the results of the test are known, the statement added. Ajmal claimed five wickets in Sri Lanka’s first innings. The hosts won the game by seven wickets on Sunday to take a 1-0 lead in the two-match series.

The second Test starts on Thursday in Colombo.  “This has come as a surprise to us,” Pakistan manager Moin Khan said in Colombo. “But there is no panic. We support him and he will play in the next Test.” The Pakistan Cricket Board (PCB) said it would react after the testing was over. “Once such a report has been made, the ICC rules take over and the entire process is controlled and regulated by these rules,” the PCB said in a statement. “The PCB has no choice but to wait for the outcome of the process before proceeding further in the matter.” The first Test was umpired by Ian Gould of England and Bruce Oxenford of Australia, while Zimbabwe’s Andy Pycroft was the match referee.

The 36-year-old Saeed Ajmal has taken 174 wickets in 34 Tests and 182 wickets in 110 ODIs since he made his international debut in 2008. As well as heading the ICC’s bowling rankings in 50-over cricket, Ajmal is also in the top 10 of Test and Twenty20 bowlers. He was previously reported in April 2009 but was cleared to play after testing.
In May while playing for Worcestershire in English county cricket, Ajmal was angered by a tweet from England fast bowler Stuart Broad which suggested that the Pakistani used a different action during testing. Former England captain Michael Vaughan had posted a photograph of Ajmal’s action on Twitter and wrote: “You are allowed 15 degrees of flex in your delivery swing..

Broad replied with the comment “This has to be a fake photo?!” before a further tweet stated: “Bowlers can bowl very differently in a lab while being tested compared to needing wickets in the middle.” Ajmal said at the time that Broad’s comments were disappointing. “Broad’s dig hurt me the most,” Ajmal told the pakpassion.net website. “Former players will sit in the commentary box or wherever else and say some things for attention, but you don’t expect such things from a fellow professional cricketer who is still playing cricket. It was disappointing to read Broad’s comments.” After the tour of Sri Lanka, Pakistan will play a two-Test series and three ODIs against Australia in October and November in the United Arab Emirates. Ajmal is seen as the key to the hopes of former champions Pakistan in next year’s World Cup in Australia and New Zealand. -nation