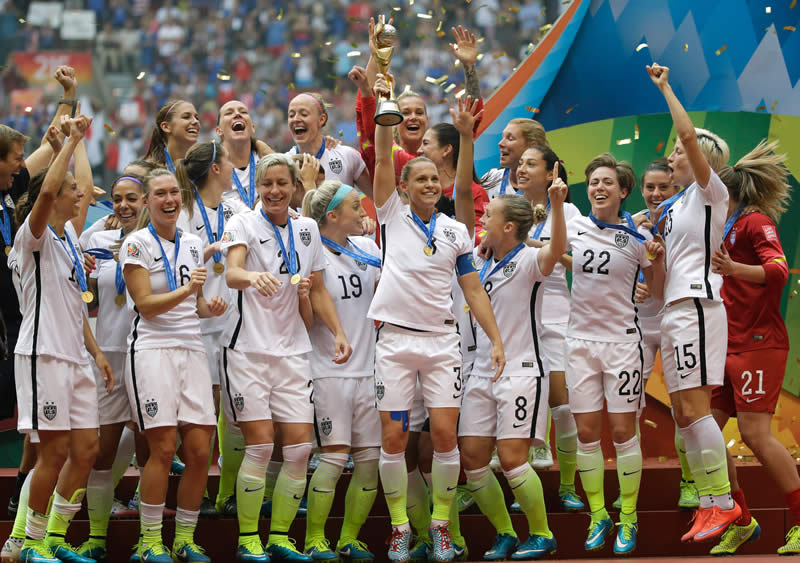 Carli Lloyd became the first woman to score a hattrick in a World Cup final as she inspired the United States to a 5-2 demolition of defending champions Japan on Sunday.

The United States, winners in 1991 and 1999, became the first nation to win the crown three times and avenged their loss to Japan on penalties in the 2011 final.

Lloyd, 32, scored her first goal after just three minutes on the pitch at Vancouver’s BC Place Stadium with the second coming two minutes later, and her third after 16 minutes. “I was on a mission today,” said Lloyd, whose teammates Lauren Holiday (14) and Tobin Heath (54) also found the net. Yuki Ogimi got one back on 27 minutes for the Asian champions with their second coming thanks to a 52nd-minute own-goal by US defender Julie Johnson. “It’s unreal, it just hasn’t sunk in yet,” Lloyd said. “I’m mentally fried. “We knew that if we took it to Japan they would get nervous on the pitch.” Coach Jill Ellis said her only thought after the early goal-fest was: “Pinch me, wake me up!” “We’d talked about starting fast, and I just knew that the players could deliver. “These players were born for the big moments,” she added. “I envisaged us winning the trophy.

I think five (goals) is a dream come true.” It was the third meeting between the two teams in a major championship with the Americans winning the Olympic gold ahead of Japan in 2012, when Lloyd scored both goals in a 2-1 win. The stunned ‘Nadeshiko’ were in disarray just minutes into their title defence. Wearing the captain’s armband Lloyd, who was one of three US players to miss a penalty in the 2011 final, got her first two goals from set pieces as she delivered a performance that saw her presented with the Golden Ball award as the tournament’s best player. The player from New Jersey picked up Megan Rapinoe’s low cross from the right to tap in. Two minutes later the Japanese defence was in meltdown when Lloyd again found her way through following a freekick. To euphoric chanting of ‘USA, USA, USA’ from the 53,341 fans in the packed stadium, Holiday got a third just before the quarter hour mark with a volley after a weak defensive header from Azusa Iwashimizu.

And just two minutes later Lloyd completed her hattrick with a stunning shot from 50 yards over the head of a stunned Ayumi Kaihori in the Japan goal. Japan coach Norio Sasaki said he had tried to warn his players of the danger posed by midfielder Lloyd, who was playing up front alongside Alex Morgan, but his shouts were drowned out by the crowd. “I tried to tell them but they couldn’t hear me,” he said. “Miss Lloyd, she always does this to us. In London she scored two and here she scored three. “We’re really embarrassed, but we really respect and admire her, she deserves the golden ball.”