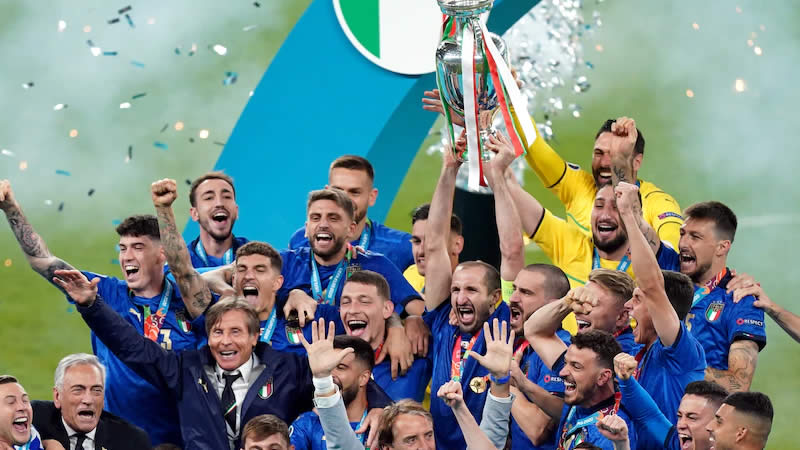 Italy have been crowned champions of Europe after a nail-biting penalty shootout win over England at Wembley Stadium.

Italy beat England 3-2 on penalties to win the Euro 2020 final. They dashed English hopes for their first major title since the 1966 World Cup. England and Italy went to a penalty shoot-out in Sunday’s Euro 2020 final following a 1-1 draw after extra time at Wembley. Luke Shaw scored inside two minutes, the fastest ever goal in a European Championship final, but Leonardo Bonucci bundled in an equaliser at a corner midway through the second half.

England were attempting to win their first trophy since the 1966 World Cup, while Italy won their only European title in 1968. Italy had 66 percent possession and had 630 completed passes. England had managed 255.

A frenzy had set in ahead of the UEFA 2020 final. Tens of thousands of raucous England fans descended on Wembley Stadium, singing, drinking and savouring the occasion, as the country reached fever pitch ahead of its first major football tournament final in over half a century. The supporters draped in red and white flags congregated along the famous approach to the stadium, Wembley Way, downing pints of beer and chanting an array of England anthems as excitement built.

Italy proved to be the better side and proved themselves the best team of the entire tournament. They had beaten favourites Belgium, Spain, and a young England side. They won the second European Championship after 53 years.