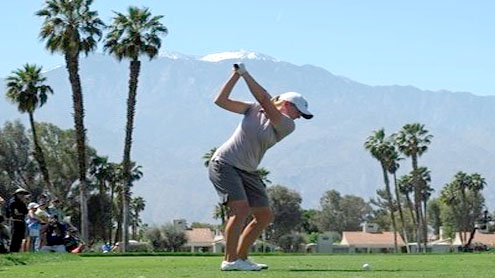 RANCHO MIRAGE: Stacy Lewis spent her teen years in a back brace with scoliosis, becoming a star golfer after major corrective surgery. She lost a final-round lead at the U.S. Women’s Open in her first pro tournament, but bounced back to become a solid — albeit winless — pro.Lewis’ grandfather died the day before the Kraft Nabisco Championship began this week, but she stayed to honor the golf-loving 84-year-old who passed the game down to her.So when Lewis went head-to-head with the world’s top-ranked player Sunday on the back nine at Mission Hills, she quieted her roiling nerves and outplayed Yani Tseng to win the LPGA Tour’s first major by three strokes.No problem for a woman with a spine of steel.Lewis shot a 3-under 69 to finish at 13-under 275, rallying from an early two-stroke deficit while staring down Tseng, who blinked when Lewis showed a grit borne from years of hard work and struggle.

“I had a good feeling coming into this week because I love this golf course, and I’ve played well here before,” Lewis said. “Even when my grandfather died, I was (thinking) there’s a reason that happened this week, and there’s a reason my parents were here. It all worked out the way it should.”Lewis punctuated her tenacious back nine in gusty wind at Mission Hills with an improbable 20-foot par putt from the fringe on the 17th hole, essentially finishing off Tseng. With a perfect read and precise pace, the putt broke into the cup as the crowd roared, leaving Lewis crouched with her hands on her knees.”I was shaking, just trying to calm down,” said Lewis, who won $300,000 from the $2 million purse. “My heart was racing, and I was gathering my thoughts. I still had five more shots that I needed to make sure I paid attention to.”The 26-year-old from Texas with her alma mater’s Arkansas Razorbacks head cover on her driver watched as Tseng missed an 18-foot par putt that essentially clinched it.

Five shots later, Lewis still had one more surprise coming in her tumultuous week.After a beer-and-champagne shower from her fellow pros in the LPGA’s tradition for first-time winners, Lewis and her parents, sister and caddie took the Kraft Nabisco’s traditional winner’s leap into Poppie’s Pond off the 18th green, holding hands while running to the water.Lewis and caddie Travis Wilson did modified cannonballs — but Lewis’ mother, Carol, got her foot stuck in the rough and badly injured her left leg on the leap, going to a hospital in an ambulance. Lewis groaned in disappointment when she got the news from her father, Dale, after the celebration: Her mother ran 14 miles earlier Sunday in preparation for a marathon.”She doesn’t surprise me any more,” Dale Lewis said. “She just continues to go up a level every year since her back surgery.”Lewis, who had five screws and a steel rod implanted in her back during that surgery, led going into the final round of the 2008 U.S. Women’s Open, finishing third in her dramatic pro debut. A year earlier, she won a trophy but not an official LPGA Tour title as an amateur when she led after the only round of the rain-shortened LPGA NW Arkansas Championship.

After honing her swing and refining her approach to every aspect of a pro’s life over the past year, she came into this season with high expectations. Lewis blew a second-round lead against Tseng in the Australian Masters seven weeks ago, but was by far the cooler pro on the final day at Mission Hills.”I’ve played a lot with Yani, and I know I can hang with her,” Lewis said. “I know I can hit the ball with her. It’s huge. I know I can play with the best players in the world.”Tseng shot a 74 with four bogeys, losing focus in her quest for her fifth worldwide title already this year. Lewis bogeyed the 15th hole to allow Tseng to pull within a stroke, but Tseng bogeyed the next two holes.”She handled the pressure very well,” said Tseng, the first to hug Lewis after her final 3-foot putt. “She did great, better than me.”Morgan Pressel, Katie Futcher and Angela Stanford finished nine strokes behind Lewis in a third-place tie. Michelle Wie (75) and 2007 Kraft Nabisco champion Pressel (76) both faltered badly in their final rounds after starting the day within striking distance of Tseng and Lewis, with Wie falling into sixth place — still the former child prodigy’s best finish in a major since 2006.

The famed Palm Springs wind finally kicked up during the coolest day of the tournament, and the strong gusts might have been reflected in the scores. Lewis’ 69 matched Futcher and Julieta Granada for the day’s low round.”The wind was swirling, and the greens were firm,” Tseng said. “I just tried to be perfect, maybe too perfect.”Lewis shared the first-round lead with road roommate Brittany Lincicome and opened a three-stroke lead after two rounds, but Tseng blitzed past her playing partner Saturday with a bogey-free 66 when temperatures finally cooled after two days of stifling heat. Lewis struggled to a third-round 71.Lewis stayed in the tournament despite the Al Lewis’ death in Toledo, Ohio, on Wednesday. She’s heading home for the funeral early next week.

“Everybody in the family knew he would have wanted me to finish out this week,” Lewis said. “He lived via my golf. He loved watching it on TV. He recorded it every week so he could keep watching it over and over again, but him and my grandma, they both got to see me play the whole round today. They were out there with me for sure.”A night off clearly refreshed Lewis, who came out in the final round with all the aggression and confidence she lacked as the leader Saturday. She birdied the second and third holes, and Tseng’s bogey on the fourth hole allowed Lewis to pull even.Tseng took the lead with a birdie putt on the eighth hole, but Lewis immediately pulled back ahead with a long birdie putt on the ninth before Tseng missed a short par putt. Lewis went two strokes up with a 12-foot par putt on the 12th. – Yhoonews

Woods gets in 18 holes of practice

Woods gets in 18 holes of practice