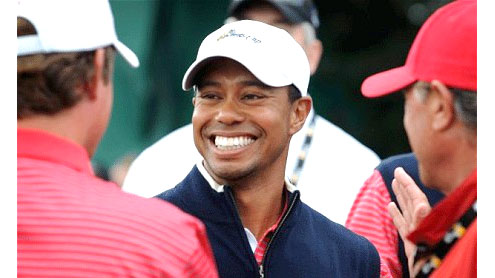 MELBOURNE: Tiger Woods clinched the President’s Cup for the USA team with the winning point over the Internationals in the singles of the teams match play event at Royal Melbourne on Sunday.

The former world number one thrashed Australian Aaron Baddeley four and three to push the defending champion Americans beyond the 17.5 points needed to claim their seventh President’s Cup against the non-European Internationals.Woods also provided the clinching point when the Americans posted a 19.5 to 14.5 triumph over the International team at the previous event in San Francisco in 2009. The Americans split Sunday’s singles with the Internationals 6-6, finishing overall 19-15 winners.

“It does feel good. I was hoping it wouldn’t come down to my point. I was hoping that Stricks (Steve Stricker) and I could take a victory lap back here,” Woods said. “But we (USA) didn’t get off to a good start early. We needed to get our point so we went out there and played really well today and put a lot of heat on Badds (Baddeley).”

Woods, who only got into the US team as the captain’s pick after taking part in just eight USPGA Tour events this year because of injuries, was praised by team captain Fred Couples. “He was ready to go this whole week. He was ready for a month,” Couples said. “A lot of people have asked why I picked him and how he was going to play. Certainly, I couldn’t answer how he was going to play but this week I think he showed to himself that his swing is back and he’s healthy, and that’s more important to me.”The star-studded American team went into the final day’s singles leading by four points and although Greg Norman’s International team made a charge to get within two points they were too strong in the final matches.

“The Jim Furyks of the world and Tiger Woods made a lot of putts and they kept our guys out of the match,” Norman said. “I think if you look back over it, it came down to just that and when you look back over all of the days, our foursomes let us down, no question about it.” It was a dominant performance by the Americans, who won both the foursomes, split one of the fourballs and narrowly lost the other fourball.Apart from Woods, America’s other singles winners were Hunter Mahan, Nick Watney, Jim Furyk, David Toms and Steve Stricker.

Furyk was the only player to finish unbeaten in five matches at the event. The Internationals faced a tall order heading into the final day as no team trailing into the singles matches had gone on to win The Presidents Cup, although in 2003 the United States trailed 12.5 to 9.5 and fought back to tie the competition in South Africa.

South Korean Kim Kyung-Tae, who holed a pressure putt at the last hole to beat Woods and Dustin Johnson in Saturday’s four-ball, carried on his form with a resilient one-up win over Webb Simpson in the day’s opening singles. Victories followed from teammates Charl Schwartzel of South Africa, Japan’s Ryo Ishikawa and Australian Greg Ogilvy as the Internationals began strongly. But Mahan and Watney restored control with comfortable victories before Furyk, Toms and Woods got the Americans across the finish line with Stricker winning the day’s final singles match two and one over South Korea’s Y.E. Yang.

Adam Scott had a two-and-one win over Phil Mickelson, and Retief Goosen edged out Matt Kuchar one-up for the Internationals’ other wins. It was an accomplished performance from the Americans who came to grief when they last played The Presidents Cup at the demanding Royal Melbourne layout, losing 20.5 to 11.5. The classic sandbelt course tested all the golfers to the limit in Friday’s brutal blustery conditions, but played a little easier on the weekend in cooler weather. “I came in here in ‘88 and played the Bicentennial so I assumed that if I could learn the course in a day and a half or two, these guys can learn it in two or three practice rounds,” Couples said. “It was never a concern. – Dailytimes

80,000 nominees to participate in letter-writing competition