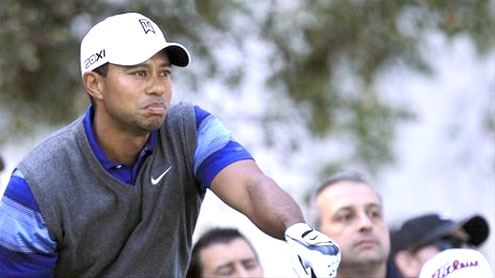 Tiger Woods hit two eagles and four birdies in a five-under-par 67 to surge into a three-shot halfway lead at the Chevron World Challenge in California.

The former world number one ended on eight under despite a double bogey five on the 15th, while overnight leader KJ Choi hit a quadruple seven on the 15th.Choi birdied the 16th for a 73 to join Matt Kuchar in second on five under.England’s Paul Casey improved to three over with a 68, while Scotland’s Martin Laird is seven over after a 74.Laird started well with a birdie on the first, but he double-bogeyed the second and dropped further shots on the 12th, 17th and 18th to join America’s Keegan Bradley in a tie for second last in the 18-man field.

Casey eagled the second and birdied the third and fifth to move from his overnight seven over to three over but a mixture of three birdies and three bogeys checked his progress.Neither of the British players looks likely to challenge this weekend, although Woods will be wary of those behind him after he surrendered a four-shot halfway lead in last year’s tournament, losing to Northern Ireland’s Graeme McDowell in a play-off.Woods, who has won this tournament four times, showed glimpses of the form that has seen him collect 14 majors in a glittering career.

He hit a delightful flop shot from the rough on the par-five 13th to set up a birdie, ending a run which saw the American, whose last victory came at the Australian Masters in November 2009, pick up four shots in three holes to eradicate Choi’s three-shot overnight lead.Choi was moving along steadily at two under for his round when he approached the 15th tee but the South Korean’s card was completely wrecked by a seven on the par-three.

He found water with his tee shot and then hit his third into the same greenside pond as he dropped back to four under par.Woods too found the water and recorded a five but both players atoned to a degree with birdies on the par-five 16th.Kuchar’s five-under-par 67 included seven birdies, while his American compatriot Zach Johnson sank six successive birdies midway through his round to join Hunter Mahan in a tie for fourth on four under. – BBC