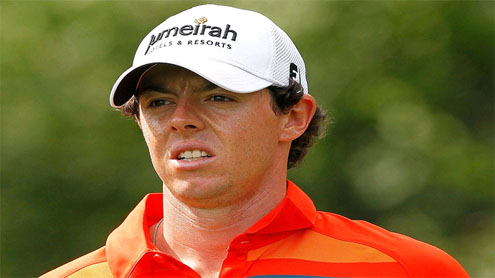 Florida: New world number one Rory McIlroydoes not see Tiger Woods as a rival and said his toughest opponent is simply the golf course he faces each week.

McIlroy ascended to the top of golf’s world rankings with victory in the Honda Classic on Sunday, keeping his cool after Woods charged up the leaderboard with a final round 62.His triumph left his phone buzzing with messages of congratulations from Manchester United’s manager Alex Ferguson and strikerWayne Rooney and also plenty of talk about the sport having a new rivalry at the top.Woods’s best ever final round score indicated he could yet get back to something like the form that took him to 14 majors and be a regular Sunday challenger alongside 22-year-old McIlroy.

‘To be honest in golf, you can have a rival if you want, but at the end of the day, your biggest rival is a golf course. You have to be able to beat the golf course more often than not and that’s all you are trying to do,’ said the Northern Irishman, who features in this week’s lWGC-Cadillac Championship at Dora.‘Ultimately you’re going to have to beat people coming down the stretch on Sundays and whether it is Tiger Woods or Phil Mickelson or Lee Westwood, Luke Donald or Martin Kaymer, or whoever, I would never really want to say that I am in a rivalry with someone.

‘I just want to go out there and play good golf and solid golf and if I can do that then people can make up the rivalries themselves.‘But I don’t see myself as anyone’s rival out here—I just see myself as Rory McIlroy trying to play good golf and winning tournaments.’The US Open champion acknowledged that his victory at the PGA National on Sunday had been all the more special with Woods waiting in the clubhouse knowing he could grab the title if McIlroy slipped up.

‘To be honest, I was probably thinking to myself, could it not just have been anyone else?’ McIlroy said. ‘It definitely made Sunday a little more difficult, or more interesting.‘I can sit here and lie and say that it didn’t feel better to have Tiger post a score and to be able to play solid—it maybe made it feel a little sweeter than if it had been someone else.’McIlroy will play the first two rounds this week on the Blue Monster course with world number two Luke Donald and number three Lee Westwood. – Khaleejnews