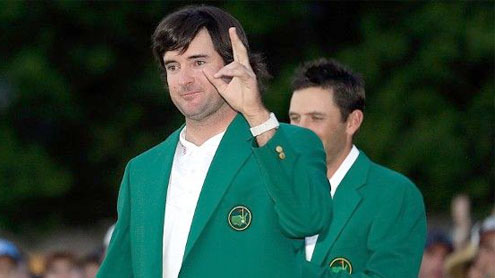 The 33-year-old left-hander won at the second extra hole to claim his first major title.Watson and 2010 Open champion Oosthuizen tied at 10 under after 72 holes and shared par fours at the first extra hole, the 18th. Going down the 10th, both drove into trees to the right of the fairway but Watson hit a fabulous second to eight feet and had the luxury of two putts for the title after Oosthuizen’s bogey five.The emotional Watson broke down in tears as the final putt dropped before embracing his caddie and mother, followed by friends, including fellow PGA Tour players Rickie Fowler and Ben Crane.

“This day means so much more than putting on this Green Jacket, in many ways,” said Watson, on receiving the trademark blazer from defending champion Charl Schwartzel.”But it is a special time to do it. It was amazing. The last nine holes, I don’t remember anything.”Watson’s previous best major placing was finishing as runner-up to Germany’s Martin Kaymer at the 2010 PGA Championship, after losing a play-off.He becomes the eighth consecutive first-time major winner and he will move up to fourth in the world rankings.

Watson, playing alongside Oosthuizen in the penultimate group, fired four birdies in a row from the 13th to join the South African on 10 under but missed a birdie putt to win in regulation, finishing with a 68 to force a play-off. Oosthuizen, 29, rocketed into the lead when he holed his second shot at the par-five second hole for only the fourth albatross in the history of the Masters.That took him to 10 under and though he dropped back mid-way through an absorbing final round, he climbed back up with a birdie at the 15th and carded 69.

“When something like that happens early in the round, you’ve got to keep your emotions in place,” he said.”That was my first double eagle [albatross] ever, and to do it in a spot like Augusta, that’s special.”I felt it was tough over the next four or five holes, but then when we turned I felt very relaxed. I made a few great saves. I probably did very well to get in the play-off.”England’s Lee Westwood shot 68 to climb into a tie for third on eight under, with Americans Phil Mickelson (72) and Matt Kuchar (69) and Sweden’s Peter Hanson (73), the overnight leader. “The story of the week is you have got to putt well to win the Masters and I haven’t putted well,” said Westwood after his sixth top-three finish in his last 10 majors.

Three-time champion Mickelson began the day one adrift of playing partner Hanson in the final group and was expected to mount a trademark charge.But he made a triple-bogey seven on the short fourth after hitting his tee shot into bamboo to the left of the green and was unable to match the back-nine fireworks of Saturday or 2010.”That’s where it went away and I don’t know what else I would have done differently,” said the 41-year-old. “I’ve got to go left, I didn’t mean for it to hit the stand.”

England’s Ian Poulter (69) finished seventh on five under, while Australian Adam Scott, last year’s runner-up, carded a 66 that included a hole in one on the 16th to finish four under.England’s Justin Rose (68) and Ireland’s Padraig Harrington (72) finished alongside Scott in a tie for eighth.Tiger Woods (74) and Rory McIlroy (76) both ended disappointing weeks tied on five over after beginning as pre-tournament favourites.World number one Luke Donald carded 68, his first under-par round of the week, to finish three over. – BBC