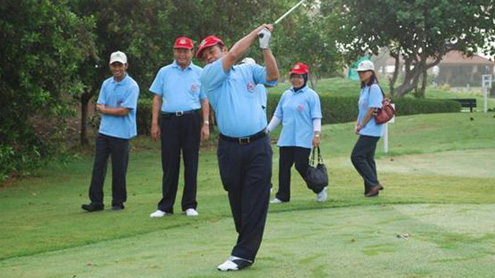 LAHORE – The Pakistan Golf Federation held a three-day coaching session for the golf professionals of Punjab at the Lahore Gymkhana Golf Club.

This coaching event was attended by 25 top golf playing professionals of Punjab and conducted by Romit Bose, a top Class A Certified Golf Professional and a member of the National Golf academy of India and throughout the three working days, in attendance were Taimur Hassan, Honorary Secretay PGF, Mehmood Aziz, Joint Secretary, and Omer Ghias, National Coach of PGF.

In this extensive practical exercise the topics covered were basics of the golf swing, golf rules, golf fitness, club fittings, green keeping, how to coach juniors, and also the psychological aspects of the game. Also in attendance was Max Babri, a known sports pshychologist, who was there to get a feel of how golf is taught at the highest level and how the highest coaching qualification can be acquired as he said: “This will help me in conducting courses to cover the mental aspects of the game.”

The three days coaching session which concluded yesterday was followed by an exam, the question paper spread over 80 questions and 10 minutes of practical questioning about the various coaching aspects. Those who qualify will be graded as B or C or D grade coaches and the qualification will enable them to become recognised coaches, with ability to earn a reasonable living.

Romit Bose was extremely comfortable about coming to Pakistan and had no concerns about the security situation. He was pleased with the response of his students and felt that he was able to communicate with them without any problem. In continuation of this assignment he hopes to come back again this year to follow up on this coaching exercise. “With the launching of this system and acceptance thereof, the professionals have realised that they have to extend their knowledge and grasp of the knowledge imparted to them.

Certainly with persistence, everything is possible”. Romit Bose now moves to Karachi for a three days coaching exercise there. In Lahore the top professional golfers who attended the coaching session were Aadil Jehangir, Shafiq Masih, Abbas Ali, Latif Masih, Asghar Ali Hafeez Masih, Jafal, Arif and Mobin. Others who attended are coaches in the C and D grade and look forward to improve their ratings. -Pakistantoday