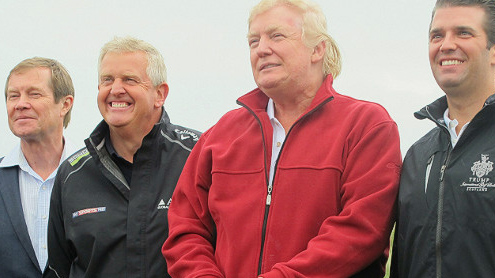 After seven years of planning and construction costing over $150 million, Donald Trump’s dream to open a golf course in Scotland was finally realized on Tuesday.

The U.S.-based billionaire hit the ceremonial first tee shot at Trump International Golf Links, having weathered a storm of controversy involving environmentalists, local residents and politicians.  “It’s been worth it,” he told media during his rain and wind-swept round at the venue. “This is truly the greatest golf course anywhere in the world. Everybody knows it. Most people are saying it and most of the golf people are saying it, most importantly.”  Trump welcomed guests from the European Tour and the Ryder Cup organizing committee, and told them: “There’s really nothing like it.”

Set on the east coast of Scotland, eight miles north of the city of Aberdeen, the course occupies part of the private Menie Estate, bought by Trump in 2006.  The opening of the championship course is the first step towards the American tycoon’s goal of creating a resort featuring a second golf course, a hotel, luxury holiday homes and a residential village.  Trump expects the total bill for the development to exceed a billion dollars, although the next stage of building is currently on hold while he contests plans to build an offshore wind farm nearby.

Rarely has a new golf course had such criticism and hype. Accusations of bullying from local residents and objections from environmental groups were documented in the movie “You’ve Been Trumped,” while sport writers have been thrilled at every new photo revealing the dramatic holes. The sheer amount of money pumped into the project enabled English golf architect Martin Hawtree to manipulate the land on an unprecedented scale.  “This is one of the most extraordinary golf links sites you have seen or will ever see,” Hawtree said at the opening ceremony. “There is no doubt in my mind it will be in the top three in the world. I just don’t know who’ll be number two or three!”

Before the opening, Golf World magazine announced that the course has gone straight into its UK course rankings at number eight, ahead of several British Open venues including Royal Lytham & St. Annes, which will host the golf season’s third major tournament next week. Trump’s ultimate goal is to bring a major tournament to his latest course, and the European Tour chief executive George O’Grady hinted that it may not be far away.  “Great courses need great tournaments,” said O’Grady, “We will work with Mr. Trump to bring the right event here.”

Sandy Jones of the Great Britain and Ireland Professional Golfers’ Association made the only reference to the saga of controversy and criticism around the course’s planning:  Golf is a responsible business. It embraces the environment. I wish the environmentalists would embrace golf,” he said.  On the course, Trump was joined by one of the European Tour’s most successful players, Colin Montgomerie, who described the course as “dramatic and spectacular.”

On the question of whether Trump International will ever host the British Open or a Ryder Cup event, the Scottish golfer was optimistic.  “There’s no doubt that tournament golf will come here,” the 49-year-old former European Ryder Cup captain said.  “It’s a fantastic opportunity for people locally, nationally and internationally to come to this area.”  Trump championed his Scottish family ties throughout the planning process, and continued the theme at the opening ceremony as he gave out whiskey and shortbread to invited guests.

The tale of how an American billionaire’s dream became reality across the pond has made Trump International Golf Links one of the hottest tickets of the summer, with tee times already in short supply. The course opens to the public on Sunday, with green fees costing $310 on a weekend or $233 on a weekday, the same price as the summer rate on the prestigious Old Course at St. Andrews, known as “the home of golf.” – CNN