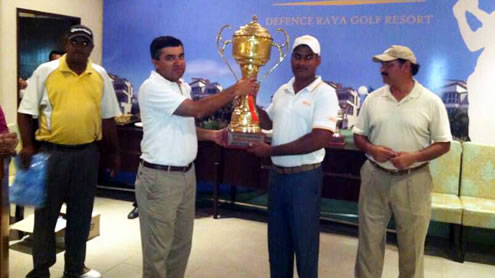 In the three days 2nd Sayid Paper Open Golf Championship,contested at the Defence Raya Golf Course in Lahore, Matloob Ahmed (U Fone) emerged as the top player of this open golf event with three days compact looking  scores of 71,72 and 70 and an overall winning aggregate of 3 under par 213.

Shafiq Masih (Honda) turned out to be a big threat to his victory march on the final day and Matloob had to show resilience and champion like application of golfing skills, as Shafiq played real hot golf and almost had the better of Matloob through superb hitting and excellent work on the greens. His 100 yards chip on the final 18th hole was the outstanding shot of the championship and duly applauded by a large number of his golfing fans and even by his rival Matloob. Lucky for Matloob that he hit an equally brilliant chip and prevented any advantage going to Shafiq, thus retaining control and the winners dominance.

Matloob  who is turning out to be a golf champion of significance and seeking top positions in major golf championships, was once again placed in the front in the final round of this championship and also in the limelight with a number of strong and determined competitors craving for his downfall. The blood seeking rivals were Shafiq Masih, M.Asif and Shahid Javed Khan and  of course the upcoming ones Aadil Jehangir and Asher Hanif. In particular Shahid and Aadil had strategised and prepared game plans to upset Matloob’s winning advance by playing adroit and accomplished golf, but somehow they had overlooked Matloob’s golfing skills and the potential to translate them, when required.This became evident from the moment Matloob teed off in the final round as thereafter all the others seemed to cloud away, except the artful Shafiq .Not that  Shahid, Aadil and Asher in any way, were unimpressive, it was just that Matloob  was too solid and steady.Each tee shot by Matloob on the par fours and fives carried a touch of class and though bogies did come his way on holes 4, 8 and 16, comprehensive damage control was done through five birdies and ten pars.

In the heat of the competition M.Asif faded  away but compliments to Shafiq Masih of Honda who kept the temperature warm enough to make Matloob feel threatened till the last shot of the closing hole on the final day and in the process making the competition a delight to watch.The final closing moments of the championship were indeed awesome.Shafiq demonstrated excellence in hitting and excellence in the score of the final day playing superbly with a round of three under par 69, with birdies on holes 7, 10, 12, 15 and 18 and two bogies on the 3rd and 9th holes.Shafiq did not win but was cheered lustily for a wonderful effort.

In the amateur section the top performers were Raza Ali Khan, winner gross, Col(r)Asif Mehdi, runner up gross, Faisal Sayid, winner net and Farid Malik, runner up net. Compliments to Sayid Paper for holding this open championship on a golf couurse that is simply admirable and amazing and in the process adding to the livelihood of the professional golfers.And in his concluding speech Faisal Sayid of Sayid Paper commited that he is willing to support all preparations for raising and training a golf team for the next Olympics.

At the conclusion of the event, Faisal Sayid awarded prizes to the winners in a grand prize distribution ceremony attended by Brig.Shahid Wahab Rao of DHA, Fakhar Imam and Khurram Sarfraz of Defence Raya and a large number of professional golfers.