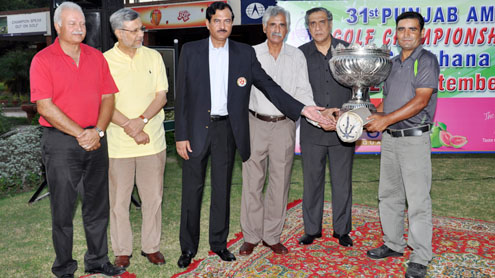 Ghazanfar Mehmood of Rawalpindi Golf Club seized the 31st Punjab Amateur Golf Title after backing up his modest round of 77 on the first day with two tremendous rounds of 71 and 70 on the 2nd and third day of this Punjab Amateur Golf Championship that concluded at the remarkable and historic Lahore gymkhana Golf Course.

Ghazanfar surfaced as the champion with a perfection oriented golfing performance on the final day on Suday and in the final go he did not relent for a moment.The all round effort comprised perfect tee shots on the par 4’s and par 5’s,crisp approach shots from the 120 yards distance and some adept putts on the greens.And his card for the final day reflected four birdies and 12 regulation pars,seven of them coming in a sucession from holes 12 th to the 18th.The two bogies in the earlier part of the round on holes 2nd and 5th hole were adequately taken care of through later birdies.

As for the other contenders Mubariz faded out in the earlier part of the chase as he lost strokes with gay abandon in the front nine.Sardar Murad,Fakhar Imam and Sajid Khan also met the same fate giving Ghazanfar a free ride to his moment of glory.And this grand performance also secured for him a free trip to Karachi to participate in the Sind Amateur Championship,as confirmed by Asad I.A.Khan,SVP,Sind Golf Association and also a member of Pakistan Golf Federation Executive Committe.

Ghazanfar ended the championship with a score of 218 plus 2 strokes penalty for a rules violation,followed by Waseem Rana of DHA,Karachi at a three rounds aggregate score of 226 and Sajid Khan at 228 while the other nearest challegers at the start of the final round finished way behind. Sardar Murad and Fakkhar Imam ended the Championship at a score of 230 followed by Mubariz at 231 and M.Rehman of Royal Palm at 233.In the race for net honors Salman Jehangir really blossomed and with final round score of net 65,he emerged as the winner of best net.His net aggregate was 208.The runner up was Dilshad Ali Changezi of Quetta,with a net 213 and Dr.Arshad Mehmood secured the third slot with 217.

Sponsors of this Championship were Punjab Golf Association and Shezan. At the conclusion of the event,Zia ur Rehman awarded prizes to the winners in a grand prize distribution ceremony attended by Javed Nasrullah,Convenor Golf,Shahid Gul Qureshi(Captain Golf) ,participating players and families.