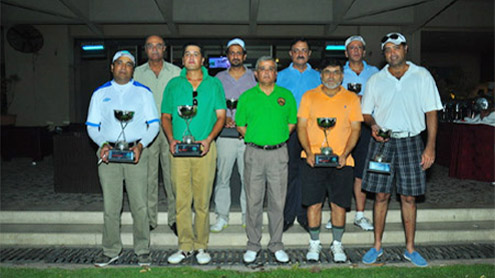 In the contest for honours in the handicap category 13-18, a very young upcoming one Hamza Kayani proved his mettle with an excellence oriented round of net 66. His hard work at the practice sessions paid off and while his long drives on the par 4’s and par 5’s were accurate indeed. He also reflected control of his shot game around the greens. He appeared as a good prospect on the golfing scene.

Competitive conditions were tough indeed and even players like Asad IA Khan, Dr Nasrullah, Fayyaz Raja, Hamayun Mian and Faisal Sayid failed to match the pars of the course and petered out of contention. Of notable interest is Faisal Sayid’s misery on the closing hole where he topped his bunker shot and ended up in the water hazard and the return shot was equally misfired and took him back to the bunker and the resultant loss of five strokes one hole cracked his chances of victory chances. Other winners of competitions in handicap category 13-18 were Haris Naseer (net runner-up) and Umair Butt (gross winner) and Fareed Malik(gross runner-up). At the conclusion of the tournament the prizes were awarded to the winners by Asad IA Khan, MD of NESPAK. – DailyTimes