by Top
in Featured, Golf
0 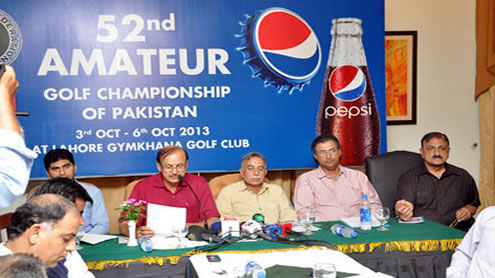 LAHORE: A galaxy of amateur golfers from four countries and Pakistan will show case their talent and potentialities during the 52nd Amateur Golf Championship starting at Lahore Gymkhana Club here from Thursday.

Addressing a press conference, Pakistan Golf Federation (PGF) secretary general Mohammad Nayyar said that foreign participating countries were Afghanistan, Bangladesh, Iran and Sri Lanka. “They will add thrill in the event besides making it equally tough for our home golfers. The presence of foreign golfers will establish the status of the event as a big competition,” he added. Also present on the occasion were Agha Ali Imam (Convenor Golf Lahore Gymkhana), Amir Mehmood (Captain Golf Lahore Gymkhana) Khawaja Pervaiz Saeed (Director Media) and Muhammad Ashraf Khan (Pepsi Cola). This National Championship has a history of its own. It was first held in 1961 at the Rawalpindi Golf Club, where JG Donwnie was the first national amateur champion of the country.

Agha Ali said that for four consecutive days extremely good golf would be on display at the par 72, Lahore Gymkhana Golf Course. “It has all the ingredients of a challenging golf course with features like facilitating fairways, adequate rough to punish wayward shots, water hazards that make even champions nervous while strategizing a shot and not to forget the out of bounds threat on quite a few holes.” Khawaja Pervaiz stated that all players were set to meet competitive standards and bring in good scores, accumulated through consistent play.

As regards the format of the championship, Amir highlighted that the events included Men’s Amateur Championship that was an individual competitive golf event played over four days. “Any number of players who fulfil the conditions of the tournament including the players of the invited countries are eligible to participate. The field is of 70 players. Whoever submits the lowest score over the four days will be the national champion for the year.”

International Men’s Team Match will be played over two days of competitive golf. Each invited country and Pakistan will be eligible to enter a team of two players. Scores of both the players will be counted for the overall team score. The team with the lowest two days score will take the trophy. JR Jayewardene Team Trophy is a team match stroke play between Pakistan and Sri Lanka over 18 holes. The team with the lowest gross score will be the winner team. It will be played on the third day. Inter Association Team Match is a team match played over 54 holes (three days) between the four golf associations of Pakistan. Each team will comprise of four members and three best scores will count for the team score of the day. The team with the lowest gross score over the first three days will be the winner team. The women’s championship will be contested over there rounds. – Dailytimes