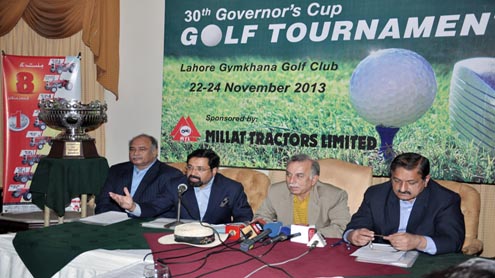 This was stated by Agha Ali Imam,Convenor Golf,Lahore Gymkhana in a press conference also attended and adressed by Ahsan Imran,CEO Millat Equipment,Omer Zia,Tournament Director and Khawaja Pervaiz Saeed, gDirector Media of the Tournament.Agha Ali Imam also stated that in friendly and pleasant weather and supportive playing conditions of the historic Lahore Gymkhana Golf Course, aspiring golfers from all over the country will apply their golfing expertise to attain success in this prestigious.Millat Tractors Governor’s Cup Golf Tournament, which will be contested over three rounds with final round to be played on Sunday,24th November.

Tracing the history of this championship,Khawaja Pervaiz Saeed said that it was introduced in the year 1984 ,and it now enters the 30th year. He further added that Millat Tractors have been sponsoring this event for 20 years in succession. The Chairman of Lahore Gymkhana, the golfers from around the country, the home based golfers of the club, accept with gratitude the largesse of Millat Group and graciously applaud and compliment Sikandar Mustafa Khan, Chairman of Millat Group who has kept the relationship intact and live. Omer Zia explained the various categories of the competition which includes a contest for men amateurs,seniors,veterans and ladies.

He further said that there are 95 contestants in the amateur category,43 in seniors section,36 in veterans and 20 in ladies section.

The prominent competitors vying for honors are:

Khawaja Pervaiz Saeed stated that   the defending Champion is Mohsen Zafar while  winners of the past decade are Asad Zia(2011), Sardar Muhammad Ahmad

Mr. Javed S. Lodhi is the only golfer who has won this title two times in a row.

Ahsan Imran of Millat Group shared that the group is a leader  in the field of agriculture equipments and have contributed towards the machinery distribution network which is of great help to the farmers in their every day lives. As part of their corporate social responsibility they lend support to golfing  activity in a big way.

Army, Rangers to be Deployed in 13 Districts of Punjab