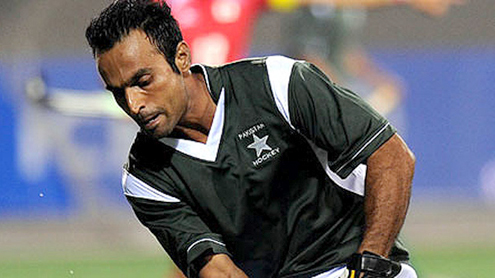 LAHORE: The Pakistan Hockey Federation (PHF) has named penalty corner expert Sohail Abbas to lead Pakistan’s hockey squad in the upcoming London Olympics, the only sport where the country harbours any realistic hopes of a medal in the Summer Games.

A 20-member squad was named after one-day trials, watched by selectors Hanif Khan, Khalid Basher and Arshad Chudhary, at Abbottabad Hockey Stadium on Sunday. PHF president Qasim Zia, secretary general Mohammad Asif Bajwa and chief coach Akhtar Rasool were also present during the trials. The 35-year-old Sohail was retained as captain despite Pakistan’s poor finish in last place at the Sultan Azlan Shah Cup in May this year in Ipoh, Malaysia. The 20-man squad will be trimmed to 18 by the team management next week before Pakistan fly to London for the Games starting on July 27.  Pakistan’s recent poor performance forced selectors to recall senior players Rehan Butt, Waseem Ahmed and Shakeel Abbasi who featured in a rebel hockey league in India which threatened their places for the Olympics.

“We have included seniors so that the Pakistan team can benefit from their experience,” chief selector Hanif Khan said. “We tried some juniors recently and now this squad for the Olympics is a combination of juniors and seniors.” Hanif said the team was selected after consultation with the captain and the coach. Three-times Olympic champions and with four times world champions Pakistan have slumped at international level after poor planning and with talent becoming increasingly scarce. They finished at their worst-ever eighth position in the last Olympics in Beijing four years ago, and then slumped to the 12th and last position in the 2010 World Cup in India.

PHF chief Qasim was very much optimistic about the team’s performance at forthcoming London Olympics. “When I took over charge of the PHF, my targets were the Asian Games and the London Olympics. In the Asian Games Pakistan did well and positively in the London Olympic result will be surprising,” he maintained. Qasim said the selectors picked up best available lot after a long term planning. Chief coach Akhtar said that they were going to London with high hopes. The team did win the Asian title in China in late 2010 however to secure direct qualification for the London Games and give a boost to confidence. “We have high hopes with the team,” said Hanif, a member of Pakistan’s gold medal winning team in the 1986 Los Angeles Olympics.

“If they finish on the victory podium it would be as good as a gold medal, if they finish between 4-6 it would be worth the hard work.” Pakistan also won Olympic gold medals in 1960 and 1968 but their last Olympic medal in 1992 when they picked up bronze in Barcelona.Pakistan are in Group A along with Australia, Great Britain, Spain, Argentina and South Africa. Defending champions Germany are in Group B, which also includes Netherlands, South Korea, New Zealand, India and Belgium. Pakistan athletes will also compete in athletics, swimming and shooting through wild card entries, but they have no serious medal hopes in those sports.