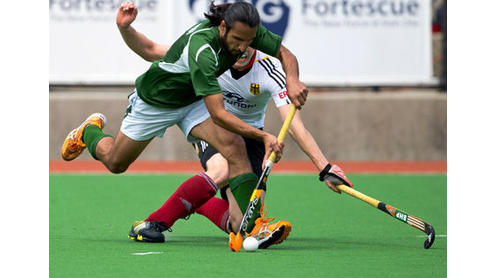 MELBOURNE: Arch-rivals India and Pakistan marched into the semi-finals of the Champions Trophy while Australia’s hopes of a fifth straight title remain on target after beating England 2-0 in Melbourne on Thursday.

The Netherlands also progressed to the final four after easily disposing of New Zealand 2-0. India, chasing their first Trophy medal for 30 years, edged out Belgium 1-0, while Pakistan upset Olympic champions Germany 2-1. While making the semi-final is an achievement for India, they now face the much tougher task of playing Australia before a capacity home crowd.

Pakistan will also be underdogs again when they take on the Dutch in Saturday’s semi-finals. India, a bronze medallist at the 1982 event at Amstelveen, is bidding to play in their first Trophy final. Unlike their other wins at the tournament, India’s win over Belgium was hard fought, with Indian coach Michael Nobbs praising his team’s defence. “It’s an amazing feeling, they have worked really hard. I didn’t think we played that well today but our defence was amazing,” Nobbs said.

“It’s something I haven’t seen from an Indian defence in years, but I thought they played their hearts out.” The win came despite the Belgians controlling much of the match, however they were unable to convert their many opportunities. The Indians made them pay, scoring a goal against the run of play through Nithin Thimmaiah in the 13th minute.

Pakistan is one win away from their first Champions Trophy final since 1998 after upsetting the Germans. Pakistan’s win was due largely to Shakeel Abbasi, who dominated and scored both of his team’s goals. Abbasi said he believed his team could continue to do well in the tournament. “In the last three matches I didn’t score and I am a mentor for my side so I realised I had to score,” he said. “If we have confidence and play hard and have dedication, we have the potential to win against every team.”

Pakistan’s second and decisive goal was full of controversy. The goal was scored by Abbasi, however Germany referred the decision claiming it should not have been awarded as the ball initially came off the back of the stick of a Pakistani player before making its way to Abbasi. The video proved inconclusive with the goal standing despite the German protests.

Australia saw off the English threat with a first-half goal to Jamie Dwyer and a final goal to Chris Ciriello sealing the match. “We were hoping to work into the tournament and tonight was probably our best game,” Dwyer said. “In saying that we haven’t let a goal in three games so defensively we are doing well, it’s just about creating opportunities up the front.” The Dutch were pleased to progress to the last four, yet coach Paul van Ass said he didn’t feel his team played their best.

“It wasn’t the best game from us here. It wasn’t a fun game to watch, but maybe this weekend we will see a lot of nice matches,” he said. “The test will come this weekend when we play against high pressure. That is what we are here for so I’m looking forward to that.” After scoring first through Jeroen Hertzberger, Netherlands struggled to find a way through until a brilliant run into the circle by Sander de Wijn for Billy Bakker to convert for a two-goal cushion and passage into the semi-finals. – Dailytimes