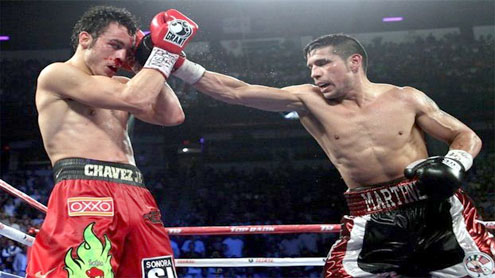 Martinez, 37, dominated and was leading comfortably on the judges’ scorecards when he got into trouble in the 12th and final round, and the Argentine had to survive a late onslaught by Chavez as they went toe-to-toe.

Chavez knocked Martinez down in the final round but the veteran was able to hang on in front of a sold-out crowd at the Thomas and Mack Center arena in Las Vegas. “He caught me with a good left hook and I lost my balance,” Martinez said. Judges Stanley Christodoulou (117-110), Adalaide Byrd (118-109) and Dave Moretti (118-109) all scored it in favour of Martinez. Martinez, who came into the fight as a 2-1 favourite, improved to 50-2-2 with 28 knockouts.

The 26-year-old Chavez, son of one of the greatest boxer’s in Mexican history by the same name, was making his fourth defence of the WBC middleweight crown, which at one time belonged to Martinez. “I had him hurt, but I couldn’t finish him off,” Chavez said. “I think a rematch is justified. “I hurt him like no one else before.”

Ringside officials said Chavez landed 37 power punches in the final round while Martinez connected with just eight. But overall, Martinez landed 390 of 908 punches compared to 178 of 322 for Chavez. Asked if he would give Chavez a rematch, Martinez said: “Of course, I’m ready to start training again.” Martinez was stripped of his WBC title belt two years ago. – Dailytimes