Grand National: Synchronised out of big race at Aintree

by ToP
in Racing
2 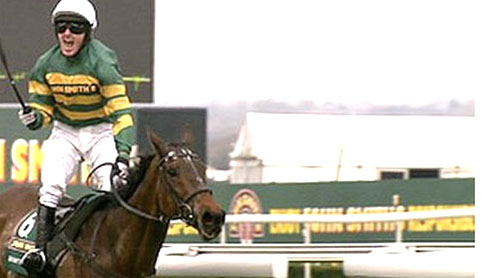 Welsh National winner Synchronised is one of nine horses to be withdrawn from the field for the 2011 Grand National at Aintree on Saturday.The Neil Mulholland-trained Midnight Chase who placed fifth in the Cheltenham Gold Cup will also not run.Synchronised’s stablemate, Don’t Push It, who won the 2010 race for jockey Tony McCoy, is top weight this year.The 11-year-old has been allocated 11st 10lb, which is 5lb more than the winner carried to victory last time.No horse has won the National carrying more than 11st 5lb since Red Rum’s record third victory, under 11st 8lb, in 1977.The 2008 Welsh National winner Notre Pere, Scotsirish, Ballytrim and Nedzer’s Return all miss out following Monday’s confirmation. Frankie Figg, Dev and One Cool Cookie, who died on Friday after breaking a leg on the gallops are the other withdrawals.Synchronised is entered in the Totesport Bowl, Thursday’s feature race at Aintree.

There are 65 remaining entries but a maximum of 40 can start the famous four-and-a-half mile handicap chase over demanding fences such as Becher’s Brook and The Chair.The final field will be determined by each contender’s rating, with the highest-weighted horses given preference.Those remaining include What A Friend, part-owned by Manchester United boss Sir Alex Ferguson, on 11st 6lb.Don’t Push It, trained by Jonjo O’Neill, ended McCoy’s wait for an elusive Grand National win when the champion jockey finally won the race at the 15th attempt.The Northern Irishman, who was voted BBC Sports Personality of the Year, is expected to stay loyal to the 2010 winner rather than choose another horse owned by his employer JP McManus.Don’t Push It ran an encouraging race at the Cheltenham Festival when a staying-on 10th in the Pertemps Final, the same contest used for his Aintree preparation last year.Champion trainer Paul Nicholls is himself seeking his first Grand National victory and has one of the leading ante-post market leaders in Niche Market, who has been allocated 10st 13lb.Harry Skelton has been booked to ride Niche Market, after Ruby Walsh opted for the Willie Mullins-trained favourite The Midnight Club.

Ruby will find his sister Katie in opposition on stablemate Our Monty, who is currently number 40 in the list and will provide her first Grand National ride.The highest rated of the Mullins team is Dooneys Gate (11st 4lb).Behind the top weight, Howard Johnson’s Tidal Bay has been allotted 11st 9lb for what would be a first try over the National fences.Ballabriggs, who is as low as 14-1 with some bookmakers, has been handed 11st. Other interesting contenders include Big Fella Thanks (11st 1lb) and West End Rocker (10st 5lb).Merigo won last year’s Scottish National and he has been given 10st 1lb in the initial list while the 2010 Irish National winner Bluesea Cracker has 10st 4lb.Becauseicouldntsee is another to note on 10st 8lb while Evan Williams has State Of Play (10st 6lb) who has finished fourth and third in the last two renewals.Some of last year’s runners could be back for another crack with fifth Hello Bud (10st 5lb), and seventh Character Building (10st 4lb) among the entries.David Pipe sent out Comply Or Die to win in 2008 and that horse has 10st 8lb this time while stablemate Or Noir De Somoza has 11st 5lb.Dermot Weld’s Majestic Concorde is an eyecatching entry on 11st 5lb, while Jonjo O’Neill’s Quolibet has 10st 8lb.The final weights will rise if Don’t Push It does not run. – BBC