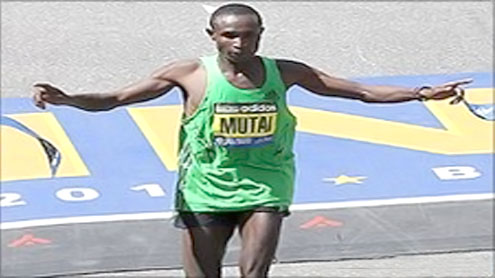 Kenya’s Geoffrey Mutai won the Boston Marathon men’s race in an unofficial world-record time of two hours, three minutes and two seconds.The previous world best of 2:03:59 was set by Ethiopia’s Haile Gebrselassie in Berlin on 28 September 2008.But Mutai’s run does not qualify as an official world record because the Boston course is downhill and he benefited from a strong tailwind.

The 29-year-old beat fellow countryman Moses Mosop by just four seconds.And Mutai smashed the course record, set in last year’s race by Kenyan Robert Kiprono Cheruiyot, by almost three minutes.”I knew I could run well but the record was not on my mind,” Mutai said. “I was feeling OK. I was confident in myself after training so much.”I tried to push myself. The wind was blowing on all sides all over the course. We were not facing the wind but it was coming from all around us.”Mutai and Mossop ran side-by-side in the latter stages of the race before Mutai pulled ahead as they moved towards the finish.He is the 19th Kenyan winner of the race in the past 21 years.There was also a sprint finish in the women’s event, where Caroline Kilel, also representing Kenya, finished two seconds ahead of American Desiree Davila. – BBC