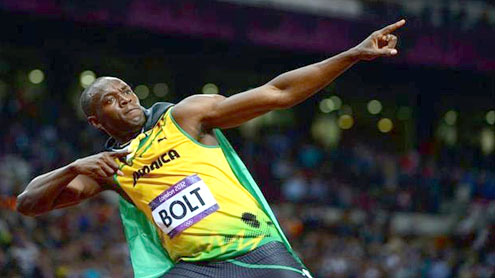 LONDON: Jamaica’s Usain Bolt sealed his status as the greatest sprinter of all time after retaining the men’s Olympic 100m title with an electrifying display on Sunday.

The world record holder turned on the after-burners at 60m to clock an Olympic record of 9.63sec, the second fastest time in history.Bolt banished the doubts that had surrounded him in the build-up to the Olympics after he was beaten by training partner Yohan Blake in the Jamaican trials, but the young pretender was left trailing two metres behind.”I executed and that was the key,” Bolt said. “When it comes to the championships, it’s all about business for me and I brought it.

“I feel extremely good and I’m happy.”Blake, long tipped as Bolt’s successor as the fastest man in the world, claimed silver after equalling his personal best of 9.75sec.”Usain has been to this level and he knows what it takes, he’s a world beater and he’s fastest man in the world,” said Blake, who sent Bolt into hiding after beating him in the 100 and 200m at the Jamaican trials.Blake added: “I have to give a lot of thanks, it’s my first Olympics and I get a silver medal. What more can I ask for? To be the second fastest man in the world behind Bolt is an honour.”

American 2004 Olympic gold medallist Justin Gatlin completed his remarkable comeback from a four-year doping ban by taking the bronze medal in a personal best of 9.79sec.The 2007 double world champion Tyson Gay came in fourth, one hundredth of a second off his teammate Gatlin in 9.80sec, with a third American, Ryan Bailey, fifth in 9.88.The sell-out 80,000-capacity crowd at the Olympic Stadium were on their feet when the eight finalists, including the four fastest men in the world – Bolt, Gay, Blake and Asafa Powell – lined up.As the television cameras picked out each racer, the excitement mounted as they reached Bolt in lane seven, dressed in black shorts and the yellow and green singlet of the Jamaican team.

The 25-year-old showed no signs of nerves as he bid to replicate his gold medal showing in the Beijing Games in 2008.To mass delight, he practised his DJ mixing skills, one hand raised to his ear, and then drew laughter after drawing pretend pistols and reholstering them after pointing them down the track.As the starter called them to the blocks, Bolt put a finger to his lips to hush the excitable crowd, briefly crossing himself and looking skywards as the television zoomed in and his picture was broadcast on the big stadium screen.As silence descended, the gun went and Bolt’s reaction time from the blocks saw him rocket away, but Gatlin had the edge on his left.

Bolt, however, pushed his huge frame through his renowned drive and transition phase after 50 metres.Teeth gritted and long legs pumping, Bolt completed what turned out to be a remarkably comfortable victory given the quality and strength of the field.After Bolt crossed the line, he immediately set off on a lap of victory, a Jamaican flag draped over his shoulders and Blake in tow.He stopped to perform his customary “bow and arrow” pose at various points, to chants of “Usain, Usain!” ringing around the stadium.

Bolt revealed afterwards that his false start in last year’s world had been worrying him before the race, but his coach Glen Mills put him straight.”My coach told me ‘stop worrying about the start, the best part of your race is at the end,” he said.Bolt’s teammate and former world record holder Powell was left in a crumpled heap after pulling up and crossing the line in 11.99sec.The two other finalists, Churandy Martina of the Netherlands and Trinidadian Richard Thompson, crossed the line in sixth and seventh in 9.94sec and 9.98sec respectively.

It was a remarkable result for Bolt, who revolutionised sprinting, and indeed athletics, four years ago in Beijing, setting then-world records when winning the 100 and 200m titles, and also starring in a record-breaking Jamaican quartet in the 4x100m relay.He left the Chinese capital as one of the most recognisable figures in world sport, unbelievably going on to beat both his individual sprint marks with new times of 9.58sec and 19.19sec in the Berlin worlds in 2009.Bolt lost his world 100m title in Daegu last July to Blake after sensationally false-starting in the final, but has fired back in most emphatic fashion. – Thenews

Shahbaz warns officials on accumulation of rainwater in city