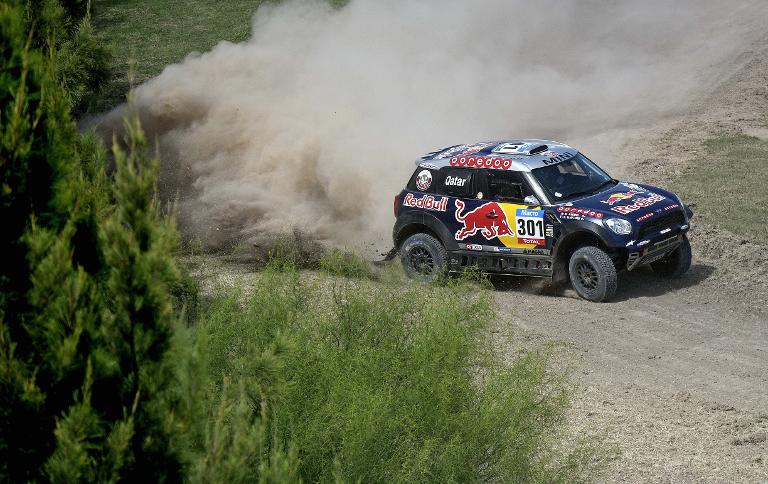 Qatar’s Nasser Al-Attiyah was stripped of victory on the opening stage of the Dakar Rally on Sunday for exceeding the speed limit while defending champion Nani Roma saw his hopes shattered. That was 22 secs faster than Argentina’s Orlando Terranova, also in a Mini, and 1min 04secs ahead of American Robby Gordon behind the wheel of a Hummer. But seven hours later, Al-Attiyah was punished for travelling at 68km/h in a section of the stage where the limit was 50km/h. He was penalised two minutes and relegated to seventh place on the stage with Terranova declared the winner ahead of Gordon and South Africa’s Giniel de Villiers in a Toyota. Veteran Peugeot drivers Carlos Sainz and Stephane Peterhansel placed eighth and 10th respectively at 2 mins 06secs and 2 mins 35secs. It was also a miserable first day for Roma as the Spaniard’s Mini broke down after just 10km and he eventually ended the day being towed home in 135th place and six and a half hours off the lead. Peterhansel, an 11-time champion, admitted that he did not drive flat out with a marathon stint to follow over the next two weeks.

“It was a bit stressful to tackle the first special when you don’t know how strong you are,” said the Frenchman. “We eased into the race, without taking too many risks, gently, keeping a watchful eye on all the dials… We’re trying to learn about the car. We had no clue how far we could go.” In the motorbike section, Britain’s Sam Sunderland on a KTM was fastest in 1hr 18min 57secs, five seconds faster than Paulo Goncalves of Portugal on a Honda and 1min 12secs ahead of last year’s winner Marc Coma on a KTM. This year’s rally features a gruelling 9,000 kilometres trek through Argentina, Chile and Bolivia before arriving back in Buenos Aires for a January 17 finish. Former winners Sainz and Peterhansel were spearheading the Peugeot campaign as the French car-makers returned to the Dakar Rally for the first time in 25 years.

Their ultimate goal was to win but at the very least they were expected to prevent the Minis from completing another clean sweep of the auto podium. Peterhansel took second place last year for Mini behind then teammate Roma. Peugeot won the Dakar for four successive years from 1987-1990 when it was still staged in Africa.

This year’s event, the seventh in South America since its enforced transfer for security reasons from Africa, is the 37th of all time. The 2014 race takes the Dakar caravan from the Atacama, the driest spot on the planet, to the Iquique dunes and crossing the Andes at the highest point on Argentina’s Route 40, the 4,970m mountain pass of Abra del Acay. In all, there will be 4,600km of special stages including a 781km time trial from the Bolivian city of Uyuni to Chile’s Pacific Coast. (AFP)