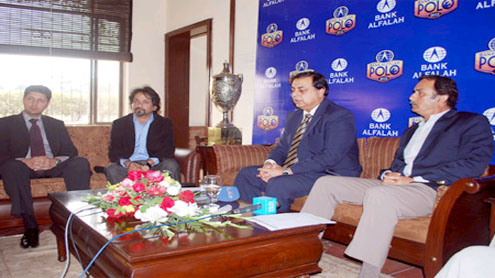 The LPC chief said they were delighted that seven players from Argentina, one each from England and Chile are part of the teams taking part in the event, a regular annual feature. “The event is being sponsored by Bank Alfalah for the seventh consecutive year,” he added.

Irfan said the National Polo Championship was started way back in 1963 and since then it had been being organised regularly and had its own status of being the top national competition on polo calendar. He praised the contribution of Bank Alfalah and said they were supporting a lot to promote a historic game that was part of the heritage of the country. Saqib Ahmad of the sponsors said the participation of foreign players would help in developing a soft image of Pakistan across the globe besides giving boost to the ongoing efforts for the further promotion of polo.

“We are confident that the participation of foreign players will send a positive message to the world that Pakistan is a safe venue for international sports event and we look forward to see resumption of sports events in various disciplines including cricket and hockey. We will continue our association with polo in future as well to play our role in developing sports,” he added. The final will be played on March 9.