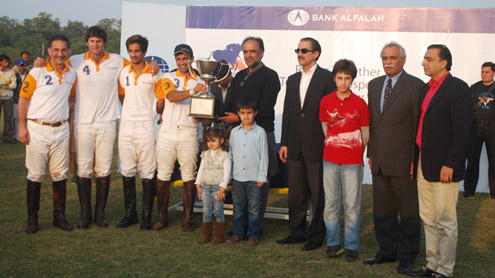 LAHORE: Colony Sugar defeated Army-Coke by 8 goals to 7 in the final to win the Bank Alfalah Aibak Cup Polo Tournament that concluded at the Lahore Polo Club Ground here on Sunday.

Federal Minister for Information and Broadcasting Qamar Zaman Kaira was the chief guest at the prize distribution ceremony. Earlier in the subsidiary final, Diamond Paints outplayed Master Paints by 7 goals to 6½ at the same venue. The main final witnessed a battle of nerves between the rivals who used all their skills to outclass each other. Manuel Crespo of Army-Coke seemed a man possessed and slammed five goals in the four-chuuker final but his efforts proved futile.