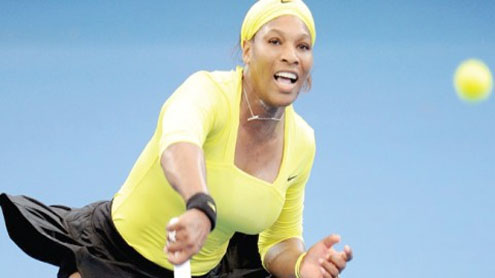 The 13-time Grand Slam winner needed just 58 minutes to dispatch Safarova in her first final appearance since last year’s US Open when she lost to Samantha Stosur.”I definitely want to continue this,” said Williams who will move from 10 to nine when the new world rankings come out.”I’ve never played consistently at such a high level with low errors like this, and the scary thing is I could have served so much better.”This marked Williams’ first WTA title since turning 30 in September and she is the first 30-year-old to win on the green clay in Charleston since Martina Navratilova in 1990.Williams, who did not drop a set in Charleston, improved to a perfect 5-0 against world number 26 Safarova. She won her quarter-final match when German Sabine Lisicki retired after 40 minutes in the first set with a foot injury.

Williams hammered five aces, 27 winners and had just eight unforced errors. She won 20 of 25 first serve points and saved four of four break point chances on Sunday.”I did pretty well in (last) summer, but then I dropped off again until this tournament. So I really am like a floating bird,” Williams said.”It’s motivating for me to go home and work harder, because I know Lucie and Sam (Stosur) and everyone is going to work hard, too. Now they know what to expect even more when they play me. This is a battle, and I want to continue to win.”

She now needs one more title to tie Kim Clijsters (41) for 13th place on the WTA all-time list.This marked Williams’ fourth career claycourt title and the second at Charleston to go with her 2008 victory.Safarova was a heavy underdog against Williams, despite her one-sided 6-0, 6-0 win over Polona Hercog in the semi-finals.Williams said the next time she plays will be in another claycourt tournament in Madrid, Spain. – PT