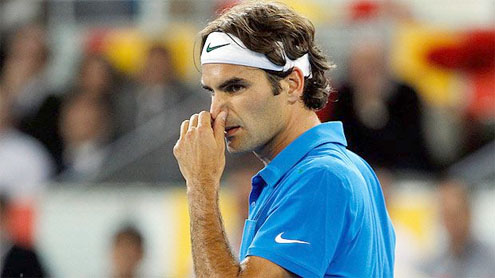 MADRID: Roger Federer had to use all his guile and experience to battle back from a set down and see off fast-rising Canadian Milos Raonic 4-6 7-5 7-6 in the Madrid Open second round on Wednesday.

The Swiss maestro, after an opening round bye at the Masters claycourt event, was playing his first match since the end of March and only just edged out the big-serving 21-year-old, who rocketed down 21 aces on the Manolo Santana show court. Rafa Nadal made much smoother progress into the last 16, dispatching former world number three Nikolay Davydenko 6-2 6-2 before joining widespread criticism of the unfamiliar blue courts, a controversial innovation at this year’s tournament.Nadal’s great rival Novak Djokovic slammed organizers and the ATP after his labored second-round win on Tuesday, saying center court at the futuristic Magic Box arena was too slippery and complaining that players’ concerns were being ignored.

Nadal echoed the world number one’s gripes and called for the traditional red clay to be reinstated next year.Officials argue that the blue courts make it easier for TV viewers to follow the yellow balls.“The court is not one that makes you feel comfortable,” Nadal, who won back-to-back clay titles in Monte Carlo and Barcelona before heading to Madrid, told Spanish TV.“You have to be realistic,” added the world number two French Open champion, who now faces 15th-seeded compatriot Fernando Verdasco for a place in Friday’s quarter-finals.“The court is a difficult court, it’s very slippery and it makes supporting movements and getting back to defend very tough.

“But the only thing we can do now is turn the page and we are not going to get the red courts back tomorrow so we have to adapt to the blue courts and the conditions as well as possible and hope for a change next year.”Third-ranked Federer, who next plays French 14th seed Richard Gasquet, struggled to make any impression on the Raonic serve in the opening set and instead was broken himself in the ninth game before the Canadian served out to take the first set.The Swiss 16-times grand slam singles champion levelled the match thanks to an exquisite drop shot before surviving several scares on his serve in the deciding set and then running away with the tiebreak 7-4 as the young pretender’s nerve failed.

Federer, chasing a fourth title of the year, sealed victory on his first match point with a ripping forehand return that caught the line.Raonic’s best result before Wednesday was his surprise victory over fourth-ranked Andy Murray at the Barcelona Open last month.It was his second match against Federer after their clash at the Indian Wells Masters event in March when Raonic, who is ranked 23, also won the first set before losing 6-7 6-2 6-4.American eighth seed John Isner became the first significant casualty when he was pipped 7-6 7-6 by fellow big-serving giant Marin Cilic.Unseeded Croat Cilic, who stands at 1.98 meters to Isner’s 2.06 meters, produced the shots when it counted in the tiebreaks, winning the first 7-4 and the second 7-3 to set up a meeting with former US Open champion Juan Martin Del Potro.

Neither player managed to break serve as Cilic followed up his five-set victory over Isner at last year’s Australian Open, their only previous meeting, with another narrow success.Isner refused to blame his defeat on the court, saying he had been beaten by the superior player on the day.“I lost because I didn’t do what I should have done out there and he was better than me,” Isner told a news conference.

“I always felt that this tournament even with the red clay was the most slippery I’ve ever played on,” added the 27-year-old.“It’s tough for a big guy like me but my opponent was also a big guy and, like I said, he was just better and deserved to win and I did not deserve to win.“I just didn’t play particularly well today which has nothing to do with the courts.”Djokovic will meet another Swiss, unseeded Stanislas Wawrinka, in the third round on Thursday.