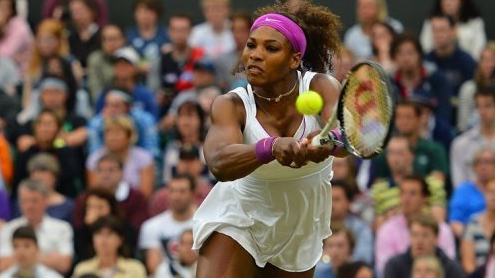 Serena Williams produced a champion’s display to knock out title-holder Petra Kvitova on Tuesday as Victoria Azarenka, Agnieszka Radwanska and Angelique Kerber joined her in the Wimbledon semi-finals.

Kvitova tipped Williams to win a fifth Wimbledon crown after the US sixth seed used her experience and cool nerve to dethrone the Czech with a 6-3, 7-5 victory.  Williams faces Australian Open champion Azarenka in the semi-finals after the Belarusian second seed reached the last four for the second successive year with a 6-3, 7-6 (7/4) win over unseeded Austrian Tamira Paszek.  Meanwhile winning machine Kerber emerged victorious in the all-German quarter-final with Sabine Lisicki after blowing four match points, the eighth seed triumphing 6-3, 6-7 (7/9), 7-5 to notch a tour-leading 45th win of the year.  Kerber faces third seed Radwanska, who became Poland’s first Grand Slam semi-finalist in the Open Era.

She defeated Russian 17th seed Maria Kirilenko 7-5, 4-6, 7-5 in a match played across several hours and two courts. Wimbledon officials decided to break with tradition and move them under the Centre Court roof for the final four games to get the match finished on schedule.  Kvitova, 22, believes Williams will now go on and win the tournament.  “I think so,” the fourth seed said.  “It is very difficult (to beat her). I can’t say impossible. She’s human.  “That’s why she’s the great champion, because she knows what she needs to play in the important points. So I think that it’s really tough to beat her.”  Williams admitted she had needed to step up a gear to get past the big-hitting Czech. “You can’t play a defending Wimbledon champion or Grand Slam champion and not elevate your game. I had to weed out the riff-raff and just get serious,” the 30-year-old said.  “I don’t know if it was more about dethroning or going out there and playing the match and doing the best that I could.”

Azarenka wobbled towards the end of her match but eventually saw off Paszek in a repeat of last year’s quarter-final.  She eased through the first set and then broke for 5-4 in the second, when the Austrian rallied.  They traded breaks as the set went to a tie-break, where Azarenka, 22, then used her raw power to propel her into the last four. “The games were really close and we were holding serve really well until the end of the second set,” said the world number two.  “It’s a great feeling to be in the semi-final of a Grand Slam. I still want to go all the way.”  “Against Serena, there can be no better opponent in a semi-final. It’ll be a tough challenge.”  Lisicki, the 15th seed, beat world number one Maria Sharapova in the previous round but eighth seed Kerber got the better of her in a nervy encounter to reach her first Wimbledon semi-final.

It was a roller-coaster affair for Kerber who squandered four match points.  In the final set, there were six breaks of serve in 11 games before the 24-year-old finally triumphed.  “I’m very happy that I won this very incredible match,” said Kerber, who was making her Centre Court debut.  “It was unbelievable. Sabine played great tennis and I needed to be at my best to beat her.”  Radwanska was delighted to have finally made it through a marathon day that saw repeated rain breaks on Court One before moving under the Centre Court roof.  “I’m just very, very happy that I’ve reached the semi finals for the first time,” the 2005 Wimbledon junior champion said.  “Today for me was like 40 hours. I was on and off all the time and waiting in the locker room the whole day.  “It’s better to finish in one day than wait another day.”  Either Azarenka or Radwanska will become the new world number one after Wimbledon depending on their performances, thanks to Lisicki knocking out Sharapova.  Radwanska needs to make the final to have a chance, while Azarenka can be certain of the top spot just by reaching the final, regardless of the Pole’s progress. -yahoonews