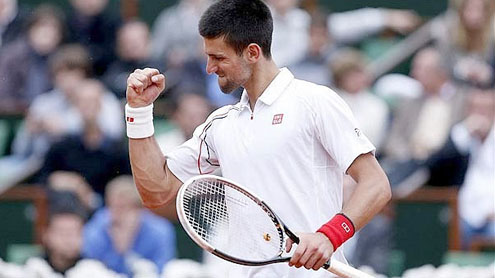 WIMBLEDON, England: Novak Djokovic closed out his latest Wimbledon win with an ace, then threw a fist and let loose a primal scream.

Bring on Roger Federer. They’ll meet at Wimbledon for the first time tomorrow.Federer earned a record 32nd Grand Slam semifinal berth and moved closer to a record-tying seventh Wimbledon title when he beat Mikhail Youzhny yesterday, 6-1, 6-2, 6-2. Minutes later on an adjacent court, defending champion Djokovic finished off Florian Mayer, 6-4, 6-1, 6-4.Federer has a 14-12 edge against Djokovic, who is ranked No. 1. They’ve met in Grand Slam semifinals five times in the past two years, with Djokovic winning four of those matches.They’ve never played each other on grass.

“A nice matchup,” Federer said. “Obviously I’m aware that Novak is the defending champion and the world No. 1. That’s not going to make it easy.”“It’s always a pleasure playing against Roger,” Djokovic said. “Obviously he’s a great champion. He has been so dominant and consistent in these Grand Slams, and he’s really an ultimate challenge on grass courts.”With two-time champion Rafael Nadal eliminated last week from the other half of the draw, the Federer-Djokovic winner will be a big favorite Sunday against a first-time Wimbledon finalist.

Federer had been tied with Jimmy Connors for the most major semifinals. He reached the final four at Wimbledon for the first time since 2009, when he won the title for the sixth time.“I’m just happy that I’m around farther than I’ve been the last couple years,” Federer said.Against the No. 26-seeded Youzhny, Federer showed no sign of the back ailment that prompted him to seek treatment during the first set of his previous match. In the second game he converted his fifth break-point chance and pulled away from there.

“My back is holding up,” Federer said. “I could focus on tennis again.”The Center Court audience included Prince William and wife Kate, Andre Agassi, Steffi Graf and Rod Laver, all sitting in the Royal Box.“I think it helps when royalty shows up, and other legends of the game come and see me play,” Federer said. “It’s inspiring.”A brief rain delay couldn’t slow Federer, and neither could Youzhny, who seemed pleased at times just to win a point. Late in the first set, when the Russian hit a running scoop forehand cross-court for a winner, he raised both arms and grinned as the crowd roared.

Early in the final set, a desperate Youzhny looked up to the royal box and asked for help from Agassi, who laughed. Youzhny then double-faulted to lose the game.“It was pretty funny,” Federer said. “Mikhail is a great guy.”He’s also Federer’s favorite foil. Federer has won all 14 of their matches, his best record against any opponent. He has lost only three of the 35 sets they’ve played.“My game maybe suits up well against his,” Federer said.

No. 3-ranked Federer seeks to match the record of seven Wimbledon titles set by William Renshaw in the 1880s and tied by Pete Sampras in 2000. If he wins the title, he’ll reclaim the top ranking from Djokovic and tie Sampras’ record for most weeks at the top.Djokovic, playing on Court 1, had just a little more difficulty in the quarterfinals than Federer. The Serb lost his serve for the only time in the fifth game but immediately broke back.

Serving at 4-all, he fell behind love-40 but erased all three break points, then broke to take the set and the lead for good.Mayer, seeded 31st, did his best to stay in the match with his unorthodox style. He dug out a between-the-legs volley during one rally. A subsequent scrambling sequence required him to dive and hit a spectacular backhand volley, then rise and put away another backhand volley.But Djokovic dominated with his aggressive play, hitting 50 winners to 14 for Mayer.“I’ve been playing really well, constantly well, from the start of the tournament,” Djokovic said. “And I hope to continue that way.” – Arabnews