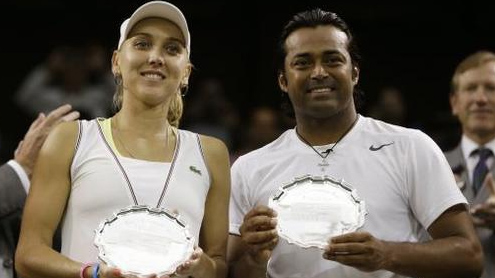 Leander Paes and Elena Vesnina pose with the runner up

LONDON: Leander Paes and Elena Vesnina will have to wait for their first Grand Slam title together as they lost the closely fought Wimbledon mixed doubles summit clash to Mike Bryan and Lisa Raymond on Sunday.

The fourth seeded Indo-Russian pair suffered a 3-6, 7-5, 4-6 defeat at the hands of second seed Americans after battling for two hours and four minutes.  It is for the second time in this season that Paes and Vesnina have ended runners-up at a tennis Major as they had lost the final of the Australian Open in January to Bethanie Mattek-Sands and Horia Tecau. Nevertheless, it was creditable performance by Paes after a stormy build up to the Wimbledon, caused by selection drama for London Olympics.

Paes was forced to pair with lower-ranked Vishnu Vardhan after both Mahesh Bhupathi and Rohan Bopanna refused to play with him. Paes was teamed with Sania Mirza for the mixed doubles event.  Although Sania did not refuse to play alongside Paes, she made it clear that her preferred partner was Bhupathi, with whom she has won two Grand Slam titles.  Paes is the highest Grand Slam title winner for India with 13 trophies, six of them are mixed doubles.  In today’s match, Vesnina served brilliantly and Paes too played well but the margin of error was little against the strong pair of Mike Bryan and Lisa Raymond, who had a superb all round game.

It was the pair of Paes and Vesnina that got the first chance to go ahead but they squandered a break opportunity in the fifth game of the opening set.  The break chance came about following a brilliant rally by an agile Vesnina at the net.  As if that waste of chance was not enough, Paes dropped his serve in the next game. The Indian saved the first break chance with an ace but could not stop Mike Bryan from converting the second.  With that break Paes and Vesnina were trailing 2-5 and finally Mike Bryan served out the set in the ninth game. The Indo-Russian pair though saved three set points before conceding the lead.

Paes and Vesnina were tested severely at the start of the second set as they had to save several break chances before getting on board.  However, the Americans succeeded in converting a break in the third game and opened up a 3-1 lead with a comfortable hold in the fourth game.  The early break gave the Americans a hold over the match. Paes and Vesnina saved a match point in the 10th game and went on to break Mike Bryan in that game to spice up the match as it levelled the scores 5-5.

Vesnina held the next game to make it 6-5 and they broke Raymond to stretch the issue to the deciding third set.  However, Paes continued to struggle with his serve and was broken in the very first game of the final set.  The Americans accepted the chance gleefully and Mike Bryan made it 2-0 after saving a chance. But their joy was short-lived as the Indo-Russian team broke Raymond in the fourth game, which witnessed five deuces, to bring the match back to level terms.

It was a see-saw affair from then on with both the teams struggling to hold serve and faced immense pressure to stay in the match. Vesnina lost her serve in the seventh game and Raymond’s easy hold put the Americans one game away from the championship.  Paes held to stay in the match but Mike Bryan clinched the issue in the next game.-timesofindia