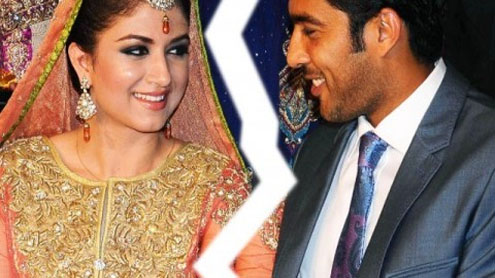 It over between Aisam and Faha

Conflicting reports surfaced on Sunday regarding the marriage of tennis star Aisam ul Haq and his wife Faha Makhdoom, who tied the knot in a grand ceremony on December 17 last year after seeing each other for over six months.

TV channels made identical claims on Sunday afternoon that Aisam and Faha had decided to separate and the tennis star had signed the legal documents and sent them to Faha, who the channels claimed was currently in London.The TV channels also claimed that the couple’s relationship hit a rough patch two months ago “as Faha was having difficulty in adjusting in Aisam’s family”. The channels also claimed that both families had met in London recently and decided to terminate the relationship.

However in a twist to the story, the fathers of Aisam and Faha rubbished the TV reports, saying there was no truth in the matter and their children’s marriage was intact.Pakistan’s best tennis player, Aisam is currently in the US on a tour. – PT