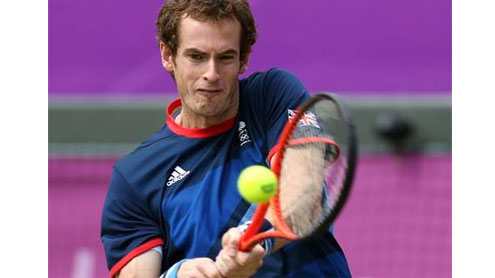 World No.1 Roger Federer left him sobbing at the All England Club by defeating him in the Wimbledon ­final last month.

But last night an emotional Murray booked an historic rematch with the Swiss superstar.The Scot is guaranteed at least a silver medal, but ­Murray looks in the mood, and the form, to make it gold against his nemesis at SW19.He earned another chance to stop the Fed Express by beating Novak Djokovic 7-5 7-5 in the gathering gloom last night, taking two hours to see off the Serb.Once the tears stopped Murray was on the biggest high of his life.

“You don’t see me smiling that much,” he said. “But I haven’t stopped smiling since I came off the court.“All the volunteers and staff were so pumped and happy. All the people that came to watch hung around outside. We normally just get the people in our team congratulating us after we have won a tournament.“The atmosphere was unbelievable – different to anything I have played in before.“And I have played in some big matches, some night matches in the US Open which I have always said was the best atmosphere.

“But that was not even close to what it was today.”Murray has not been able to overcome Federer at Wimbledon and lost the final last month in four sets.But this time he feels it might be different.“The one thing is, he has not played for the gold medal in singles before and most times when I have played him he has experienced the situation way, way more times than me,” Murray said.“It is so rare for him to be trying to do something new. He has achieved so much in tennis, so I hope that will even things out a little bit.”Murray was magic yesterday. He had two break points in Djokovic’s first service game but his opponent saved them without too much fuss.

With Murray 6-5 up, the Scot earned a set point with a deft drop volley, and took it by passing Djokovic with a rattling crosscourt forehand as the Serb rushed to the net.At 6-5 in the second set, Djokovic found himself in trouble playing poorly to give Murray three match points.He needed just one, forcing an ­error low down with a blistering backhand return of a 121mph first serve.Then came the tears as fans sang “easy, easy, easy”.Federer had it far tougher with a remarkable 3-6 7-6 19-17 victory over Juan Martin Del Potro of ­Argentina.The match lasted four hours and 26 minutes, surpassing Rafael Nadal’s victory over Djokovic at the ­Madrid Masters in 2009 as the longest three-set men’s singles match in the Open era. – DS