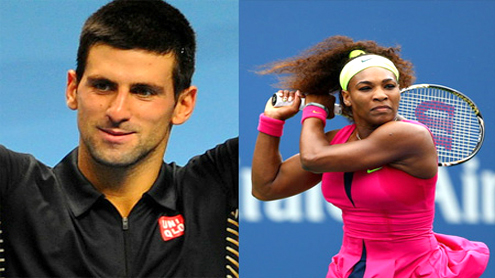 PARIS: Serbia’s Novak Djokovic and US player Serena Williams were on Tuesday announced as this year’s International Tennis Federation world champions, based on their performances in tournaments throughout 2012.

The sport’s governing body also said that US brothers Bob and Mike Bryan were men’s doubles world champions for the ninth time in 10 years, while Sara Errani and Roberta Vinci of Italy were the women’s equivalent. Dutch wheelchair tennis legend Esther Vergeer won the title for the 13th year in succession after she won Paralympic singles gold for the fourth Paralympics in a row. Stephane Houdet of France won the men’s award.

Djokovic, 25, finished top of the world rankings after successfully defending his Australian Open title and reaching the finals of the French Open and US Open. It is the second year in succession that he has been named ITF world champion. Williams, 31, took her total number of Grand Slam titles to 15 in 2012 after winning Wimbledon and the US Open. She also finished top of the world rankings and won singles gold at the London Olympics. Selection of world champions is based on results, with weight given to Grand Slams, the Olympics and both ITF international team competitions, the Davis Cup and Fed Cup. – Dailytimes