Azarenka, Federer and Murray through to second round 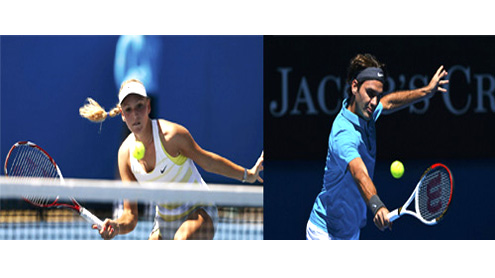 Azarenka, Federer and Murray through to second round

MELBOURNE: Serena Williams refused to let a painful tumble divert her from her quest for a sixth Australian Open title on Tuesday as Roger Federer and Andy Murray progressed almost untroubled towards their goals on day two at Melbourne Park.

Williams picked herself up to complete a resounding 6-0, 6-0 victory over Edina Gallovits-Hall, a ruthless dominance that world number one and defending champion Victoria Azarenka was unable to replicate as she progressed to the second round.Swiss Federer beat Benoit Paire 6-2 6-4 6-1 to embark on his campaign for an 18th major title after Briton Murray had steadied his grand slam nerves with a controlled 6-3 6-1 6-3 victory over Robin Haase.

After an under whelming opening day of the tournament on Monday, the sheer wealth of talent on display on the show courts almost ensured a better day two under the sunny skies at Melbourne Park. There is no bigger personality in tennis than Williams, who is chasing a third successive grand slam title after wins at Wimbledon and the US Open, and the American almost inevitably hogged the spotlight.

Rampaging towards victory, the 31-year-old turned her ankle after hitting a forehand and lay prone on the court for a couple of dramatic minutes – immediately recalling her fall at Brisbane last year that ultimately ended her 2012 Melbourne campaign. “It was definitely a lot of pain,” she said. “Also a little bit of the memory, as well. So it was definitely a little bit of both. But also at the same time trying to gather myself together and trying to make sure that I can continue.” She was soon back up, ankle strapped, to complete the rout and said nothing would stop her from taking to court for her second round tie against Spain’s Garbine Muguruza. “I’ll be out there,” she said.

“I mean, unless something fatal happens to me, there’s no way I’m not going to be competing. I’m alive. My heart’s beating. I’ll be fine.” While Williams is pursuing her 16th grand slam title, Murray is hoping to bag his second after his triumph at the US Open last year and he made short work of Dutchman Haase. “There’s nerves in the build-up,” the third seed said. “You just got to try and focus and play solid, not make too many silly mistakes. I did a good job of that today.”

Total control: Federer, four times a champion in Melbourne, easily negotiated what had been billed as potentially difficult tie against young French shotmaker Paire. “I’m obviously very happy with this first-round match, so total control,” he said. “He can be a tricky opponent but I guess his playing style doesn’t disturb me that much overall.” Federer remained on a third-round collision course with Australian Bernard Tomic, who delighted the home crowd with a 6-3 6-2 6-3 win over Argentine Leonardo Mayer.

Women’s top seed Azarenka was forced to come back from 3-0 down in the second set in her 6-1 6-4 victory over Romania’s Monica Niculescu. With second seed Maria Sharapova having also won her first round match without conceding a game, Azarenka might have been looking to make a similar statement but the Belarussian said she was just happy to be back on court. “I couldn’t wait to get out there and play,” said the 23-year-old, who pulled out of the Brisbane warm-up after suffering a toe infection following a pedicure. “I think I had a good first match. That’s what I needed to get into that competitive spirit, which I did. I’m happy.”

After only two seeds fell in the entirety of day one of the tournament, women’s seventh seed Sara Errani and 12th ranked Nadia Petrova departed in quick succession on Tuesday. While Errani’s 6-4 6-4 loss to Carla Suarez Navarro was not a huge shock, 42-year-old Kimiko Date-Krumm’s 6-2 6-0 victory over Petrova earned her a place in the record books as the oldest winner of a women’s singles match at the tournament. The upsets remained thin on the ground in the men’s draw with top 10 players Juan Martin del Potro, Jo-Wilfried Tsonga and Richard Gasquet all easing into the second round.

Date-Krumm’s upset was also the harbinger of an excellent start to the tournament for Japan, with all six of the country’s players going through to the second round. Wu Di, the first Chinese to play the main men’s draw at a grand slam in the professional era, had a less successful outing but enjoyed it nonetheless. “Even though I lost, I can see hope ahead of me,” he said after his 7-5 4-6 6-3 6-3 defeat to Croatia’s Ivan Dodig. “So I will keep trying to do better next time.”

Former world number one Caroline Wozniacki looked like she might also be on her way home but the 10th seeded Dane battled back from a set down to beat German Sabine Lisicki 2-6 6-3 6-3. Her extended match kept boyfriend Rory McIlroy, the golfing world number one, from his bed in Abu Dhabi where he signed a multi-million-sponsorship deal on Monday. “Great comeback by @CaroWozniacki! Off and running at the Australian Open…. Now I can get a few more hours sleep!” the Northern Irishman tweeted. – DailyTimes