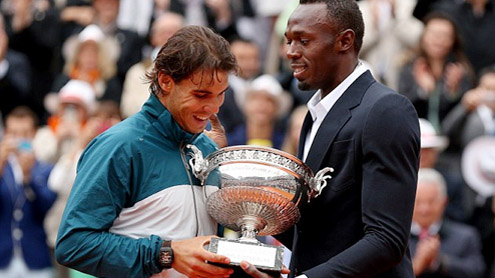 Rafael Nadal’s incredible journey began in early February at the remote ATP Tour outpost of Vina del Mar in Chile against an Argentine called Federico Delbonis, and it finished at the place that might as well be his own private domain.

Stade Roland Garros, named after a pilot who 100 years ago became the first to fly  non-stop across the Mediterranean, was last night celebrating the conclusion of another extraordinary voyage undertaken by someone possessed by similar determination.From limping crock back to Grand Slam champion, Nadal is fully restored, and when it comes to clay-court tennis, there is nobody who can stop him.In truth the final step taken towards one of the sport’s four major podiums was not the most spectacular, completed in dismal weather and as straightforward as the semi-final, against Novak Djokovic, had been dramatic.

The biggest hitch and least predictable factor in a 6-3, 6-2, 6-3 victory over his fellow Spaniard David Ferrer was an interruption by a flare-carrying protester who ran on to the court and was promptly flattened by security guards. That briefly upset Nadal’s concentration as he tried to close out the second set but neither that, nor the constant threat of a rain delay, nor the frantic scurrying of his 31 year-old opponent, could disrupt another victory march.

He said: ‘This one is very special, emotional. Five months ago we couldn’t have dreamt of this. My knee is resistant to tough matches, which is fantastic. But in other parts of my career I have felt fitter than today because I haven’t been practising as much as in the past.’He will have a full medical check but expects to be ready for Wimbledon, although he  admitted that as recently as early May he was seriously worried about his knee.

‘If you don’t doubt, you are arrogant,’ he said.Of the security incident he said: ‘It was very quick and I felt a little scared when I saw the fire but the security guys did an amazing job.’No tennis player in history has dominated a Grand Slam like Nadal has the French Open, with eight titles out-stripping the seven that Roger Federer and Pete Sampras have each collected at Wimbledon in the modern era.

At 27, provided his knee condition can continue to be managed as it has been in a spell that has seen him win seven different events since returning, the scary prospect is that there could be several more.Not even Usain Bolt, who had sat manfully in the un-Jamaican drizzle before presenting the trophy, can boast such a monopoly in his specialist event.Yet despite this latest triumph, Nadal will go to London as No 5 seed due to his long absence last year, meaning he could meet one of his biggest rivals  at the quarter-final stage.To put Nadal’s French Open superiority into perspective, it should be noted that his compatriot had not dropped a set en route to the final, but here he was capable of winning only eight games in just over two-and-a-quarter hours.

What he lacks in stature or charisma Ferrer makes up for in dogged resolve, but it was always clear he would need to play ‘red line’ tennis to compete with the great clay master — pushing his game to its extremities to try to upset an overpowering force.He held his own until Nadal was helped by what looked an incorrect line call to break for 4-3 in the first set. The second was closer than it looked until, at 5-1, a bare-chested man leapt from a courtside hospitality box into the arena carrying a flare as part of what turned out to be a co-ordinated protest around the grounds related to gay marriage laws being introduced in France.

Nadal would not have known of flares being set off over on Court Suzanne Lenglen as well — 10 arrests were made eventually — but was disturbed by the proximity of the intruder before he was crash tackled by guards.That led to Nadal being immediately broken, but then Ferrer handed him the set with a letdown in the very next game.A brief hiatus for nothing more  controversial than a heavy shower ensued at 2-1 in the third set, but soon afterwards a double fault put the defending champion 5-3 up and he served the match out with little fuss to complete his work in relatively anti- climactic fashion.The final will not live long in the memory, but the revival of a whole career that led up to it most certainly will. The rankings do not quite reflect the story yet but the Fab Four are reunited in time for Wimbledon, which will be more open than this tournament ever was. – DailyMail