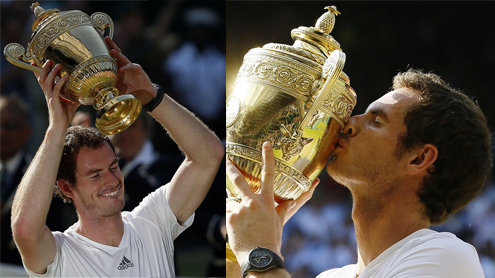 In an epic display of resilience, perseverance and sheer guts, Andy Murray finally filled the greatest void in British sport’s trophy cabinet at 5.24 yesterday afternoon, beating Novak Djokovic 6-4, 7-5, 6-4 to become the first British man to win Wimbledon since 1936 and put himself in line for a knighthood.

He nearly committed an equally historic faux-pas at the moment of triumph, having clambered up into the stands to embrace his coach, physio, dietician, fitness guru, girlfriend, best friend, father and a few chums along the way. On his way down again, he remembered that there was someone else seated just behind the players’ box.To arguably the loudest cheers of the entire day, he returned to hug his mum.

History will record this as a straight sets affair. There was, of course, nothing straightforward in his victory over the world No 1. Time after time, the path to victory was blocked as the indomitable Serbian bounced back and pushed Murray to the limits.At times, the Centre Court temperature was nudging 50C (122F). While that precluded any use of the dreaded sliding roof, which Murray hates, it made for Saharan conditions.

The 26-year-old wasn’t just sweating. Long before the first set was over, his shirt would have breached a hosepipe ban. Up in the Royal Box, even the Duke of Kent, president of the All England Club, had already removed his jacket, whereupon the Prime Minister, Leader of the Opposition and others felt safe to follow suit.Twice Murray broke Djokovic’s service – the sort of thing that usually warrants a decent round applause – and received full-blown standing ovations.No one could recall a more boisterous, pumped-up Centre Court crowd in Wimbledon history.

Echoing the unapologetically partisan emotions inside were the thousands squashed on to what will probably never be called Henman Hill again. Before yesterday, most were calling it Murray Mound. As of this morning, it surely warrants ‘Mount’ status. This was, unquestionably, an Everest sort of day.The second set was much harder work as Murray demolished Djokovic’s serve in the first game only to fall 4-1 behind. By the time he pulled it back to 4-4, even Victoria Beckham could be seen evincing a smile of sorts in the Royal Box.When Murray finally clinched the set 7-5, the Prime Minister was on his feet faster than the man behind him, Scotland’s First Minister, Alex Salmond.

The third set was exquisitely unenjoyable. Even Murray’s inscrutable coach, Ivan Lendl, started to show signs of the jitters, head down, hands fidgeting. As her son dropped another two-game advantage, Judy Murray’s meerkat poise started to droop. Perhaps the Murray of yesteryear would have started to wobble. But not this one.On he fought, pulling back from 2-4 down to 5-4 up. Three championship points came and went. By the  fourth, David Cameron had one arm clasping the other, as if checking his own blood pressure.

Team Murray in the players’ box sat freeze-frame still. This would become the longest game of the entire match. Deuce after deuce. Ye gods this was awful. How many burgers and sausages were left immolating on abandoned barbecues as this dragged on? It was just as well there was no sign of the tennis-mad Duchess of Cambridge.With just days until her due date, this sort of experience could have induced the first royal birth in South London since Elizabeth I came into the world at Greenwich.Suddenly, Murray was staring at another championship point. Djokovic lunged for the ball and drove it into the net.An ethereal ecstasy gripped SW19 and most of the nation. Judy  Murray dissolved into tears. Loyal girlfriend Kim Sears, still looking as cool as her mint green dress, disappeared into a mass hug-in.

Dear old Lendl confined himself to manly handshakes. Just for once, the plot had not followed the usual national script.For once, there is no need for those perennial Wimbledon words like ‘plucky’, ‘brave’, ‘next year’ and all that stuff about ‘the taking part’. Murray, it can be said without equivocation, nailed it.Up in the Royal Box, Alex Salmond lost all sense of decorum and started unfurling a Saltire from Mrs Salmond’s handbag. Meanwhile, the man himself was off into the crowd.Pausing at John McEnroe’s BBC commentary window to shake hands with the great ex-champion, he then hauled himself on to McEnroe’s hot tin roof and up in to the bosom of his team.

To be honest, I doubt that Judy Murray could have cared less whether he remembered to hug her or not. As she said afterwards, she had been an ‘emotional wreck’ all day, adding: ‘That has to be the best feeling ever – to watch your son win Wimbledon.’Murray is already the obvious shoe-in for BBC Sports Personality of the Year and the Honours List that follows. What price Judy Murray for a matching Mum of the Year award?Murray’s sense of shock was as glaring as it was endearing. Admitting that he had ‘no idea’ how the match had finished, he later added: ‘That last game will be the toughest game I’ll play in my career, ever.’ We lucky few in the crowd might well say much the same on our way to this morning’s cardio check.

Asked how he was planning to celebrate, he could only mutter something about last night’s post-tournament gala. ‘We have to go to the ball…’ he said with all the enthusiasm of a man contemplating root canal work. It is going to take a long time for the scale of this to sink in.Are we all getting a little carried away? I don’t think so.You have to have lived through Dunkirk and the Battle of Britain to recall a home-grown men’s champion here.‘It’s a funny experience camping on your own doorstep,’ said Adam Lambert, 28, and Eimear Toomey, 31, from Wimbledon. ‘But it had to be done.’

Retired civil servant Jane Milton had managed to secure two £130 tickets in the public ballot and wasn’t surrendering them, even if she could have stuck two more noughts on the price.After last year’s heroic tearful defeat, the whole country learned to like Andy Murray. After his Olympic triumph a month later, we learned to love him. Now, he is firmly installed on our pantheon of greats.At long, long last, we are now able to say: ‘Fred who?’ – DailyMail