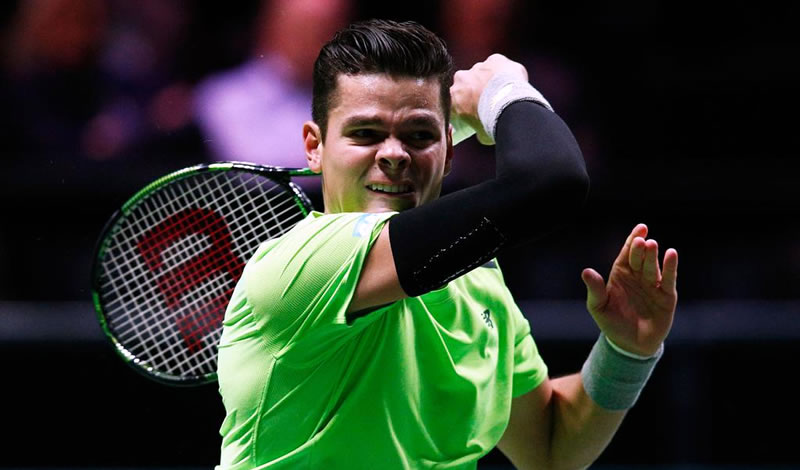 Raonic hammered 19 aces – the last on match points – to reach the second round against the world number 88 challenger. The Canadian lost the opening set in a tie-breaker before steadying to earn victory in just under two hours. He next plays Italy s Simone Bolelli. “It can be tough to adapt to match conditions, As a qualifier, Kuznetsov already had two matches on this surface. “I was behind, but I m happy with how I fought today. That s the most important thing for me,” said the seed, who struck 46 winners. Holder Tomas Berdych started with a defeat of Tobias Kamke 6-1, 7-5, winning with 11 aces in just under 90 minues. French eighth seed Gilles Simon overcame a slow start to defeat Portugal s Joao Sousa 5-7, 6-3, 6-2.

The French number two, a semi-finalist at the Ahoy Stadium in 2008 and 2013, was joined in the second round by his compatriot Jeremy Chardy, who advanced as another countryman Julien Benneteau retired 3-3 with a leg injury. Simon wore down the resistance of Portugal s Sousa in just under two-and-a-half hours. The Frenchman saved eight break points and fired eight aces in a laboured victory. “It was a really difficult match,” said the 19th-ranked winner, who rode a roller-coaster of match momentum against a dangerous number 46 opponent. “I got on top of him in the first set, but he came back to win the set (from 5-2 down). “In the second set I had to come from a break down. I was not particularly happy with my game, but my only solution was to fight as much as possible. “Finally, I got through this one.” Ukrainian Sergiy Stakhovsky reached the second round over Spaniard Marcel Granollers 6-2, 7-6 (9/7) while Canadian Vasek Pospisil spent just an hour in a winning debut with a defeat of German Philipp Kohlschreiber 6-4, 6-2. Pospisil, the reigning Wimbledon doubles champion, broke Kohlschreiber three times on the way to his fourth win of 2015.

The Canadian broke the German twice in the second set in what he called a perfect performance. “I played a flawless match, I did everything well,” said the ATP number 59. “My forehand and return were both working. I didn t do much wrong today.” Pospisil will next face the winner from top seed Andy Murray, who plays on Wednesday against France s Nicolas Mahut. Gael Monfils beat Edouard Roger-Vasselin in a French battle 6-3, 6-2.