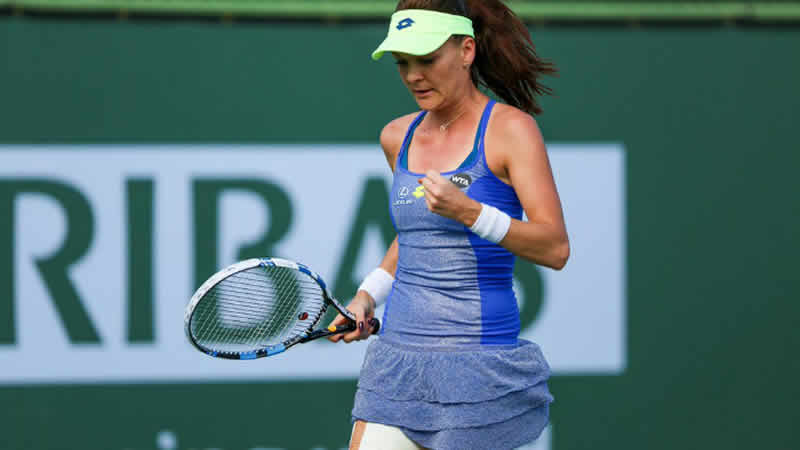 Polish third seed Agnieska Radwanska fought back from 2-5 down in the second set to reach the semi-finals of the BNP Paribas Open with a 6-2 7-6(3) victory over world number nine Petra Kvitova on Wednesday.

Radwanska, who was a runner-up in the event two years ago, raced into a 4-0 lead in the tiebreak before wrapping up victory after a little more than an hour-and-a-half of action at the Indian Wells Tennis Garden in California. The 27-year-old from Krakow will next face either top seed Serena Williams or defending champion Simona Halep, who were scheduled to play later on Wednesday.

“I am just so happy to be in the semi-finals here,” Radwanska, who will rise to number two in next week’s world rankings because of her win, said courtside where temperatures peaked at 91 degrees Fahrenheit (32 Celsius). “I have nothing to lose. What I can do today is watch Serena and Simona in the evening, go and have a good rest and be ready for the semis.” Radwanska, who beat Serbia’s Jelena Jankovic in the previous round, breezed through the opening set against an error-prone Kvitova on a hot afternoon in the California desert.

Though the Czech produced much better form to lead 5-2 in the second, Radwanska clawed back before dominating the tiebreak, with the help of a few generous net cords. Leading 4-2 in the tiebreak, Radwanska was seemingly stranded as Kvitova aimed for an acutely angled crosscourt winner that hit the net cord before bouncing wide.

Radwanska benefited from another favourable net cord when, at 6-2, she hit a service return that struck the top of the net for the ball to drop teasingly over the other side for an unlikely winner. The Pole won the match on the very next point when Kvitova, who had needed three sets in each of her three victories in the earlier rounds, netted a forehand return.

Sartaj Says He’s Ready To Discuss All Issues With Swaraj

Sartaj Says He’s Ready To Discuss All Issues With Swaraj