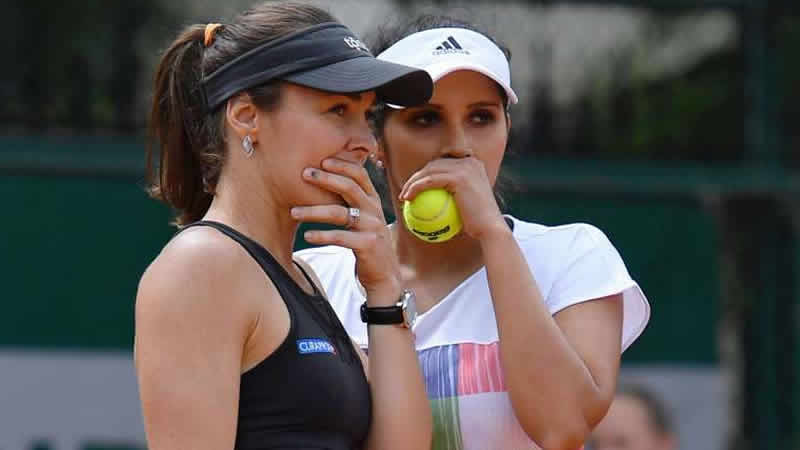 Martina Hingis and Sania Mirza lost their cool as their hopes of holding all four grand slam titles were dashed following a 6-3 6-2 defeat by Czech duo Barbora Krejcikova and Katerina Siniakova in the third round of the French Open on Sunday.

The Indo-Swiss team dubbed “Santina” were hoping to win four majors in a row after following up last year s Wimbledon and U.S. Open triumphs with victory in January s Australian Open. But the top seeds appeared all at sea on a gloomy day at Roland Garros and their bid to complete the Santina Slam ended after the Czechs blasted a service return winner to break Hingis in the final game.

Hingis and Mirza were left fuming at the umpire after a call went against them as they trailed 4-1 in the second set. Mirza tossed the ball in anger but the duo failed to win the argument, or the match, leaving Krejcikova and Siniakova to celebrate a memorable victory.

It proved to be a bad day for the big names in doubles as Venus and Serena Williams, who were the last women s team to hold all four majors in 2010, also perished in the third round, beaten 6-3 6-3 by the Dutch-Swedish pairing of Kiki Bertens and Johanna Larsson.