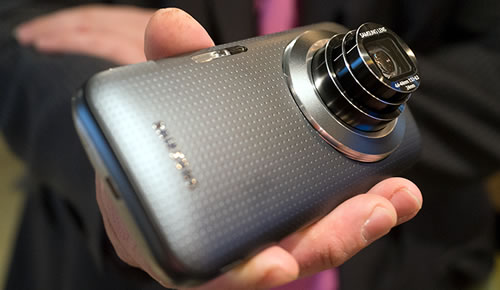 Samsung has just announced the Galaxy K Zoom, a slim smartphone that looks like the offspring of a Galaxy S5 and a Samsung Galaxy Camera. It’s half smartphone, half camera, with 10-times optical zoom via a retracting lens.


A slimmer, sleeker vversion of its predecessor, the S4 Zoom, the Samsung’s new Galaxy K Zoom boasts a 20.7-megapixel BSI CMOS sensor on the back, complete with Xenon flash and optical image stabilization. It takes beautiful photos, but still retains all the ease of taking pics on a smartphone. You can still pinch to zoom, or hold the button to take a series of shots. The interface is all Galaxy, with the same beautiful screen of the S5, in a 4.8-inch, 20.2mm-thick package. The fact that Samsung has been able to keep it relatively compact is pretty impressive. It’s pretty impressive as far as camera-centric features are concerned. This is a phone that—much like Nokia’s Lumias— is made for photo-nerds. The Galaxy K Zoom lets you tinker with things like aperture and shutter speed, or your can default to the presets, as if it were a point-and-shoot camera. And behind all these camera features, the K Zoom is also a full-fledged phone. The Android 4.4 KitKat-running device has a 2,430 mAh battery, 2.0GB of RAM, 8.0GB built-in memory, and is powered on a combination of a quad-core dual-core 1.7gHz processor. It’s LTE-ready in Europe, but 3G everywhere else.

This device is not getting a U.S. launch, and it’s well within the realm of possibilities that it never will. Still, it’s impressive exactly how much Samsung has packed into this phone. Or camera. Which is it again? – gizmodo

11 Unexpected Visitor Out On His Balcony Discovered by Guy

11 Unexpected Visitor Out On His Balcony Discovered by Guy